There’s an Award for THAT now, too!

Millenials catch a lot of hell for being entitled brats in need of constant validation but I don’t think that’s just a millennial thing. I do know that I got a lot of awards as a (GenX) kid. They were stacked six deep on the mantle so we could all marvel at my ability to show up on time, improve at things, and participate. Now was that really so bad?

Nowadays, I’m lucky if I get a pat on the head for folding and putting away the laundry. I know what you’re thinking – ON THE SAME DAY? Of course not, I’m not crazy. I’m just saying it would be nice if the Engineer would bring me a martini and a small trophy before he asks if I’m “gonna leave all those piles of clothes out as a testament to your hard work.”

Meanwhile, when my husband does something, anything at all really, that he deems to be helpful to the running of the house, he announces that shit and waits for the applause. Why, that man changes at least three diapers a month – is there no award for him? That’s a goddamn travesty, that is. Here’s one for those occasionally diaper changing husbands out there. It’s a little half-assed. Ha.

Of course we already created a whole line of merit badges just for parents. There are hordes of men and women and, yes, teenagers out there not being properly congratulated for doing what’s expected of a functioning adult. It’s time they got the recognition they deserve. Preferably in the form of an award. Because parades are a little unwieldy.

So I made one. I’m calling it “The first place ribbon for the most showing up and briefly participating in the improvement of getting shit done that you didn’t want to do but did anyway because it was expected of you, or because your mom/wife/boss made you do it” award. You can print it out and pin it in on someone’s cubicle wall! (Maybe do that anonymously, as sarcasm is rarely appreciated in the moment).

Unfortunately, I suck at photoshop. Seriously, I can’t figure that shit out at all. So instead of something awesome and sparkly with a unicorn mounting a dragon surrounded by fireworks, I ended up with this:

I know, it’s terrible. I couldn’t even figure out how to outline letters. It’s so bad it deserves its own award. I could have done better with craft paper and glue. I’m sorry.

Because it was getting late and I’d had a couple glasses of wine, I decided I could AT LEAST fancy the award up a bit with a dragon. Because dragons make everything better – starting with vans and ending with this: 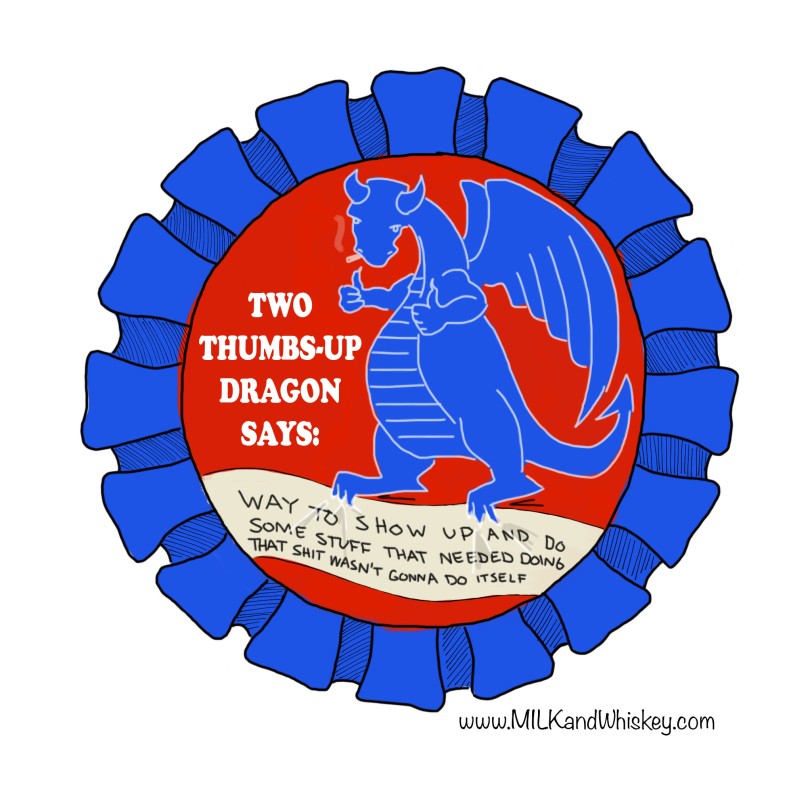 I was going to draw him spewing fire but I couldn’t get the flames right so I just gave him a cigarette instead. Two-Thumbs-Up Dragon doesn’t usually smoke, but he was just mounted by a unicorn.

The next time you see some desperate friends reaching out for validation with a humble-brag on Facebook, you give ’em two thumbs up. From a Dragon.

3 thoughts on “There’s an Award for THAT now, too!”