Mimi is a cursed name. I should have known this going in. My grandmother had and lost at least fifteen cats named Mimi.

The latest Mimi is possibly the best cat I have ever had. She is sweetness incarnate with a murder streak. She sleeps on my hip and brings me offerings of dead things with startling regularity. Max (aka shithead) is also fine…as cats go. He pees on my things.

Mimi is the sweet faced one perched amongst the orchids. Max is also there.

So the other day, the Fireman dropped by with his lovely wife (code name Moist Frito) and their idiot dog, Meatface. Meatface is basically a hundred pound baby with the strength of Andre the Giant and the impulse control of a two-year-old. We’ve all been chilling in the backyard for about an hour when Meatface finally notices Mimi, who has been sitting on the back fence all puffed up this entire time. He goes full “SQUIRREL!!!” and charges toward her.

Don’t be fooled by those sweet brown eyes, this killer can take out an “unbreakable” toy in two minutes flat.

My perfect, beautiful cat freaks out completely and, instead of jumping to about eleven perfectly safe and reasonable places, including THE OTHER SIDE OF THE FENCE, Mimi jumps onto the utility pole. She is just out of reach and, before we can contain the deliriously happy dog or even grab a broom to knock Mimi’s fluffy butt down, she has scrambled her way up the pole to perch among the wires. 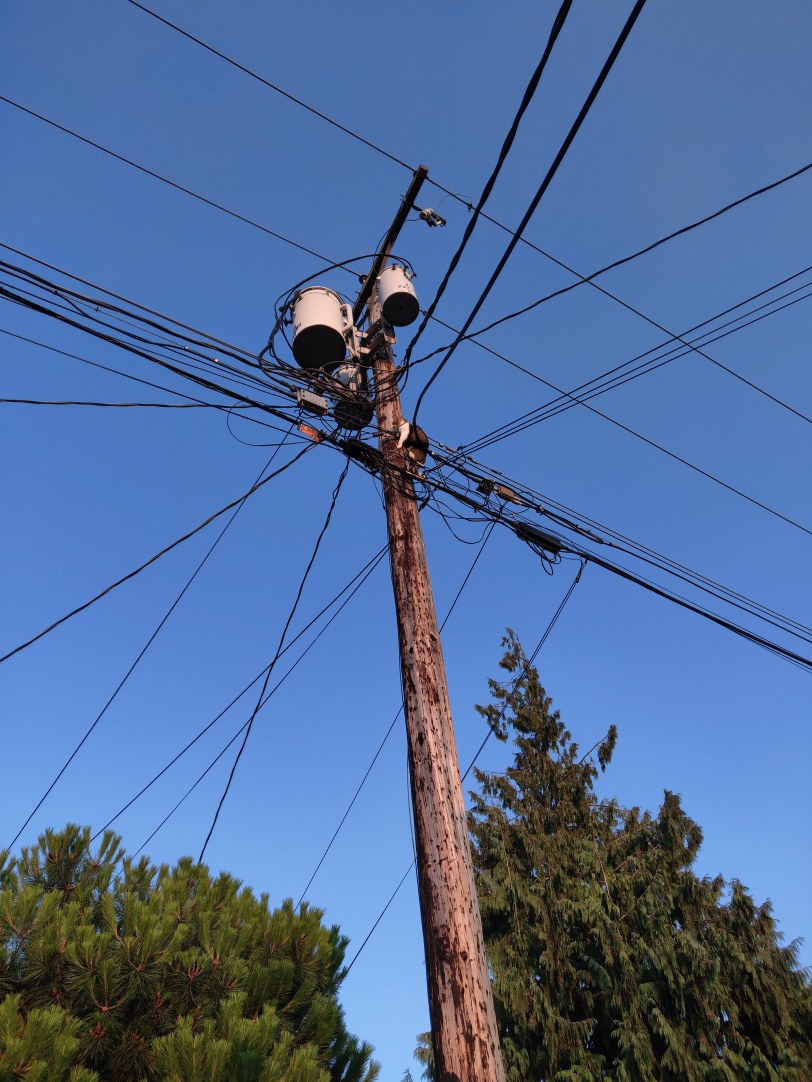 And I burst into tears. “MY FAVORITE CAT!” I cried. I ran inside and tore off my pretty white garden dress, throwing on jeans and a hoodie with every intention of climbing the pole. I ran outside, clambered up the fence and then remembered that I’m no longer twenty and my life also has value. I backed off, hyperventilating. The Engineer and the Fireman were on independent phone calls with various emergency services. Apparently, firemen do not retrieve cats from high voltage power-lines.

“They’re sending a bucket truck,” The engineer said, “but it’s late so they gotta find a guy and it’s gonna be at least an hour.”

Me: *SOB* “But she’s my FAVORITE,” I said again. I considered sending the Madness up the pole. She’s an excellent climber. Lotta wires, though.

A helpful neighbor decided to offer his support. “Mahn, my dog chased a squirrel up there once and that thing was all yelling and twitchin’ it’s little tail and then BAM! connected them high voltage wires and popped like a furry water-balloon.”

I choked and ran in the house to have an emotional collapse. As I bolted, I heard the Fireman say, “Yeah, man, I don’t know that I would have told that story just now.”

I came back and climbed up into a tree to try to coax Mimi into jumping to me.

“Mimi! The birds are starting to laugh at you. You HAVE to jump! Fly, baby, fly to mama!” I shook the branches at her.

After nearly exactly an hour, Steve showed up with the bucket truck. We all clapped. “So, he said, looking up at the situation with visible dread, “the thing about animals…they’re pretty unpredictable…” and he went on to tell me a few more furry water-balloon stories along with some equally traumatizing “broke every bone in its body” stories.

Me, steeling myself for the worst. “So you’re saying we should send the kids inside.”

He nodded. I sent the kids inside.

Max was not particularly concerned

Then, as a group, we came up with a brilliant idea to shift the odds in our factor. You know those old cartoons where the firemen use a tiny trampoline to catch falling bodies? We made two blanket trampolines and held them out under the cat, over the fence.

Steve went up in his bucket. I was prattling up at Mimi like the craziest of cat ladies in my most annoying baby voice trying to convince her that Steve was cat Santa-Claws with sardines in his pockets. She decided to take her chances climbing down. She made it back around to my side of the pole, away from Steve, pointed her head down, reached out one soft paw to the nearest line…and immediately slipped off. She sort of fell/jumped directly towards me. I wish I had video of my cat’s first flight. Not as graceful as you might think, but she landed dead center in my blanket trampoline and took off running like Steve was coming after her.

No broken bones. Didn’t even chip a claw.

Mimi keeping me company as I write up her story.

We popped like metaphorical furry water-balloons, with all the whooping and high-fiving and hugging you can imagine. That was at LEAST 3 lives, all at once. So many ways that could have gone tits-up and it actually went perfectly, exactly right.

I’m still a little in shock. I’m also thinking of papering the bottom of that damn utility pole in tinfoil. Cats hate tinfoil.