Boat Race: The Great and Ill-Fated Run of L’il Miss

The annual model boat race was a big deal at our school. It was your typical science on fun educational orgy, pitting teacher patience and cold reality against little kid imagination and attention span. Basically, teams from every grade level (K-6) had a month to construct a boat to race in the community pool at the end of year exhibition/summer kiss-off. But where teachers see an opportunity to inspire future engineers, little boys see the potential for creating a legend. Well, little boys raised on Chevy Chase movies and Road Runner cartoons. It’s possible the competition was supposed to be more friendly than I took it to be. There were a lot of classroom discussions about simple machines and rubber band motors and buoyancy. MILK’s project involved the Styrofoam packing from around dad’s new beta max and a crapload of glitter glue.

Along with my friend/science partner Ben, we pretty much invented the “Unlimited Super Awesome Rocket Powered Hydroplane Class” for the 5th grade.

As soon as the school wide boat race was announced, I knew what we would build.  They call them “pickle forks.” Or, as ESPN puts it, “Unlimited Hydroplane Racing.” My absolute favorite was Miss Budweiser. 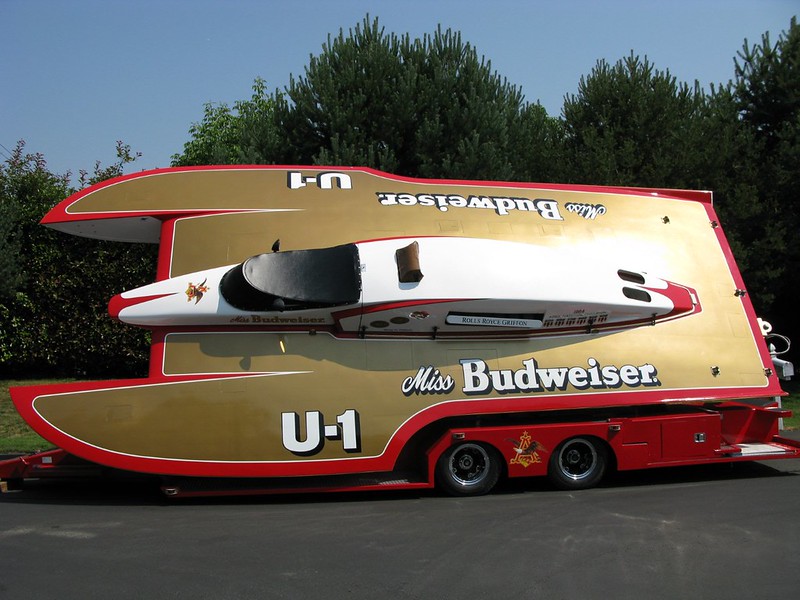 These boats look like fighter jets and often are actually powered by jet engines.

The teacher showed us some examples of homemade boats from previous years, but I didn’t even register that she was talking, I was lost in a daydream doing 200 mph across a lake with a huge jet engine screaming behind me.

Ben and I decided that my dad’s house would be the place of construction for our craft, what with the heady collection of power tools and limited supervision. I’m proud to say that I played lead designer and we built a beautiful (in the eyes of a 5th grader) hydroplane out of balsa wood, glue, and shiny Budweiser Red paint. The only thing left was to find a motor for it, I was driving myself nuts trying to figure out a system involving a remote control car motor and a small propeller, as well as a rudder for steering. We were regulars at the local hobby shop’s RC car race track, so I figured that’d be a good place to start.

That’s when our little project hit a budget snag; the motor and remote control stuff would be expensive, and needed to be waterproofed or it would probably get destroyed. It was tough to find a beer company willing to sponsor “Lil’ Miss (your beer’s name here!)” for the race. Something about ethics. The boat looked fast as hell sitting on my dad’s workbench, but I had no way to power it. Dad suggested a rubber band paddle wheel, but that would be an insult to the boat.

There was a reason I was good friends with Ben; he had a constant stream of the most wonderful bad ideas.

“True,” I said, wondering where he was going.

“I have some D sized Estes rocket motors left over from when the rocket exploded,” He said in his best Eddie Haskell.

A choral of angels sang as a shaft of sunlight cut through the garage and Lil’ Miss glowed her approval from the workbench. My voice quivered with excitement “We can’t lose.”

Who needs control and a throttle? Not this guy.

We mounted the rocket engine just behind the cockpit. It looked dangerous and fast and was pretty much everything a 5th grade boy could ever want in a model boat. The power to weight ratio was obscene. We were  giddy.

As the big day got closer there was a growing regatta in our science room, all sorts of crafty sail boats, a couple crude paddle wheelers, one poor sap made out of a milk carton, and another speed boat with a traditional hull powered by a wind up rubber band motor. “Lil Miss” sat there looking more like an aircraft than a boat. It was so awesome. The other kids would bring in their boats all proud and Ben and I would lean against the wall like 80’s movie villains. We looked down over the tops of our aviator sunglasses and said clever things like, “That must be nice to putter around with,” and “Rubber band, huh? So original.” Or, “Your mom know you borrowed her boat?” 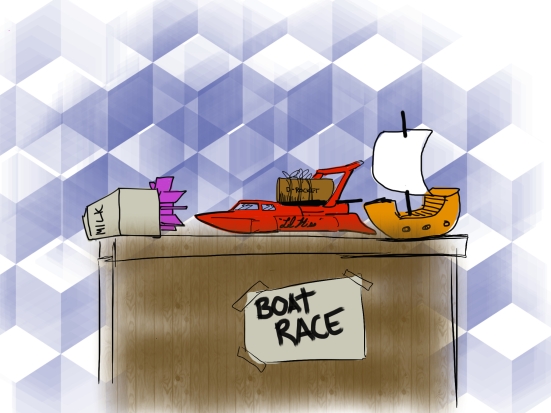 “She helped me make it, you jerks” Sasha Jenkins told us off. I was pretty sure she was into me, I began looking forward to the Sadie Hawkins dance.

The Gods punished us for our arrogance, like Icarus flying too close to the sun. Our teacher melted the wax on our wings and our dreams. We suspected Sasha had something to do with it. The teacher informed us that we were not going to be allowed to race the other kids. Our boat was considered dangerous for spectators, she said, and she didn’t feel it was fair for us to race a rocket against a rubber band. Damn you, Sasha.

Our protest that, “rocket motors were never banned in the rules,” fell on deaf ears.

“You didn’t build the rockets yourself. You were supposed to build everything. From SCRATCH,” the teacher explained, tiredly.

Ben scoffed. “Who would sell us black powder?” he asked.

He had a point.

This is why land speed records are rarely broken by 5th grade teachers.

Then I was dealt a second blow, the parents had decided to plan a camping trip with no regard to my launch window. I was heart broken, but I got over it by endangering MILK with the help of Smokey in a Kayak on the trip.

When we got back to town I called Ben to see how the boat race went. The scene he described, I’m still sorry I missed. With enough complaining from the other kids who all wanted to see “L’il Miss” run, the teacher agreed to an exhibition run. If everyone stood well behind the boat, Ben would be allowed to launch/fire it.

Apparently, “L’il Miss” crossed the pool in world record time, it took her maybe 2 seconds at most. The hydroplane left the water almost immediately, flipped and shot back towards the crowd like a crippled plane at an airshow. Kids screamed and scattered but she clipped the pool wall and corkscrewed up into a tree.

The end of “Lil Miss”

We discussed plans for next year’s run, and how to recover her from the tree. Unfortunately, we moved yet again over the summer. I lost my propulsion engineer and discovered skate boarding.

I can’t help but feel the tale of L’il Miss isn’t quite over. I can’t wait until my boys start getting science projects.

3 thoughts on “Boat Race: The Great and Ill-Fated Run of L’il Miss”