A few months back our beloved matriarch our 95 year old grandmother finally left this world for the next. It was a hell of a bar brawl (you should see the biker) but alas, one lucky shot and down she went. We all lose our edge someday.

Just kidding, she passed quietly in bed with her daughters and a granddaughter at her side, and Milk and I fighting LA traffic trying to get there in time for a final goodbye. One weird thing that happened was the song Fade Into You by Mazzy Star came on the radio when we were a couple miles from her house.

“That’s strange,” I said looking at Milk, who replied with a nod. You see that song was the closing song for a film I made about our grandfather to play at his wake. As we were pondering universal coincidence our mom called and told us to stop speeding, grandma had passed.

“Well she knows I don’t do feelings or death well, so she probably sensed we were close and spared me the moment.” Milk said.

“I’m starving, I’m getting some onion rings,” I said and pulled into a drive through. “Don’t tell mom.”  Milk rolled her eyes. The onion rings were awful, but I hadn’t eaten breakfast.

We arrived at grandma’s house and said goodbye, hugged, teared up, told stories, drank some gin, and discussed plans for the service.

A few weeks later, after a wake that left half the family brutally hungover, and took the tiny lives of dozens of clams we were standing on a hill in a cypress grove overlooking the Pacific Ocean and the town of Half Moon Bay California. Everyone remarked how our grandparents sure knew how to pick a plot. Hell if you put a house there it would be worth millions immediately. (Don’t you real estate types get any bright ideas, we’ve all seen Poltergeist)

As the pastor wrapped up the service he said the following words. “And Yvonne shall begin her eternal journey…” He didn’t get to finish the sentence. My three year old daughter, who was adorable in her black dress and shiny shoes, suddenly jumped up in her chair and did the superstar stance, hands in the air and yelled, “YAAAAAAAAAAAYYYYY!” It broke the tension like a confetti grenade. I swear I heard grams chuckle from inside the box. She would have cracked up if it was someone else’s turn. 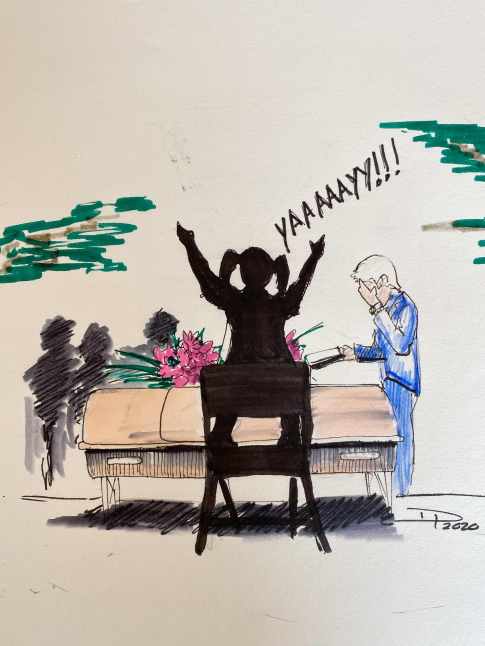 Later the same kid stood graveside with her arms crossed demanding we go down and get back the flowers that went in the hole.

As she goes on her eternal journey (pause for YAAAAAAAAAYYYYYYY) Yvonne Messer leaves behind 2 daughters, 4 grandchildren, 8 great grandchildren, and a bunch of friends and in-laws. 95 is a long time and yet still she managed to just squeeze in a good, long life between pandemics… well played. She kinda would’ve loved the pandemic in a weird way, she always enjoyed having something to fret about.

One thought on “Happy Trails”