MILK and Whiskey Go to Therapy.

Mom picked us up from day-care one day with an expression of forced chipperness and the announcement that we were going to go meet a very nice man who was going to talk to us about some stuff. And dad would be there.

I was suspicious. “Is this a shots thing? Are we getting shots?”

Mom assured us there would be no shots, just a wonderful opportunity to talk about our feelings. About things. (things was code for divorce, a word which was never actually spoken out loud by anyone related to us) “Oh shit, feelings…”

You see, after our parents split up there was the inevitable emotional scaring, some of which contributed to the creation of this blog. We joked about and threatened our parents for years that we would write a book called “Scarred” to get revenge on them for their “parenting.” Instead, the internet happened.

But before the internet happened, and the self-medicating, there was an attempt to help us become functional human beings via therapy. Therapy was HUGE in the eighties, you might recall. A zealous counselor at Palo Verde (site of such awesome posts as this, this, and this), talked to MILK for a few minutes, read my file, and suggested to our mother that she get our heads shrinked before we became serial killers or started a cult. Mom, being a huge fan of emotions and talking (and all that crap dad didn’t know how to do), jumped at the offer.  I still think I have a lot I could do with the cult thing. (Click like and follow often please)

So one afternoon post day-care we were trundled off to a therapy session in an ugly building near a good taco shop, the El Paso cafe. That’s the name of the taco place, not the therapist. It might be the name of a therapy/enchilada joint in Texas.

MILK was openly disturbed by the family dissolution and expressing that with rage-filled outbursts and weird drawings, while I’d retreated quietly into my overactive imagination, the television, and dedication to the accumulation of useless knowledge. Faced with an actual mental health professional, however, I couldn’t resist the opportunity to reengage.

The fact is, I watched a lot of age-innapropriate horror movies. A psychiatrist’s office seemed like a pretty solid opening scene to a terrible movie, so I did things to specifically try to freak out the therapist and our parents, based on what I knew the screwed-up teenagers I idolized did in horror and fantasy movies. Because here was my chance to become one. Those teenagers always ended up in awesome adventures. I call it The Corey Feldman theory.

So I was sitting there in Dr. Bob’s wood paneled office, scanning the crayon drawings on the wall and looking for any way to engage without actually discussing my feelings when I spied a table with sand and some plastic toys in it. The therapist saw me looking at the table and, maybe thinking it could be a tool to get a reading on me, said “It’s OK, Whiskey, if you’re not ready to share you can go play with the sand table.” He talked like someone reassuring a scared kitten. I immediately despised him, and began to lay my traps.

I was sure this drawing would do the trick.

I went over to the table and considered my options. There were some Greek columns, some animals made of plastic, and a few action figures and blocks. I could hear the grownups and MILK talking behind me. MILK said something about mom going through men “like a hot knife through butter,” and mom said something to dad about wondering “where the hell she’d picked up that little gem,” and then the talking got softer as I tuned them out.

I crafted a scene of a giraffe leading a human sacrifice. Roadblock, the G.I. Joe guy, was in an unfortunate position splayed in the center of a pentagram surrounded by columns, the world’s evilest giraffe held court as his zebra minions looked on, waiting for his word to draw and quarter Roadblock. Nobody mentioned anything about it, or reacted at all. I reveled in my certainty that they all had glanced at it and that I would be the subject of many hushed conversations about how nuts I’d become. Just like a real screwed up teenager!

In no time at all I just knew I would find a wand or a sword of destiny under my bed and save a magical kingdom, or troubled alternate universe! I could already picture the phone calls with hands cupped over the talking part. “there’s just something wrong with Whiskey” they would say, then pretend they were canceling a newspaper subscription and hang up when I knowingly walked into the room. The magical creatures had to be watching me.

The second session, I was ready. I made sure that I was dressed as screwed up as my parent bought wardrobe allowed and even brought some of my own props for the sand table. In addition, I had spent the last couple of days doing cliched, terrible drawings and made sure to leave my sketchbook open. I’d be on the road to adventure in no time. No monster who runs a magical portal can resist bad drawings of dead people and burning houses.

There was no third session for me. I had gone too hard too fast on them and they smelled my plot. That, or someone decided that since I wasn’t going to “participate” they didn’t need my contribution to the group. Or MILK was doing a legitimate cry for help thing and this shit wasn’t actually about me in the first place. One of those things.

After that it was just MILK getting to go to therapy while I sat in the taco place with my father. She talked to Dr. Bob and mom.  We ate nachos and doodled on napkins. “I think my closet is a portal to another dimension,” I offered. Dad took a sip off his beer and thoughtfully said, “mmmm, probably.”

We’re both really good with our feelings. And really good at drawing on napkins, I like to draw skulls. He draws Pagliacci. 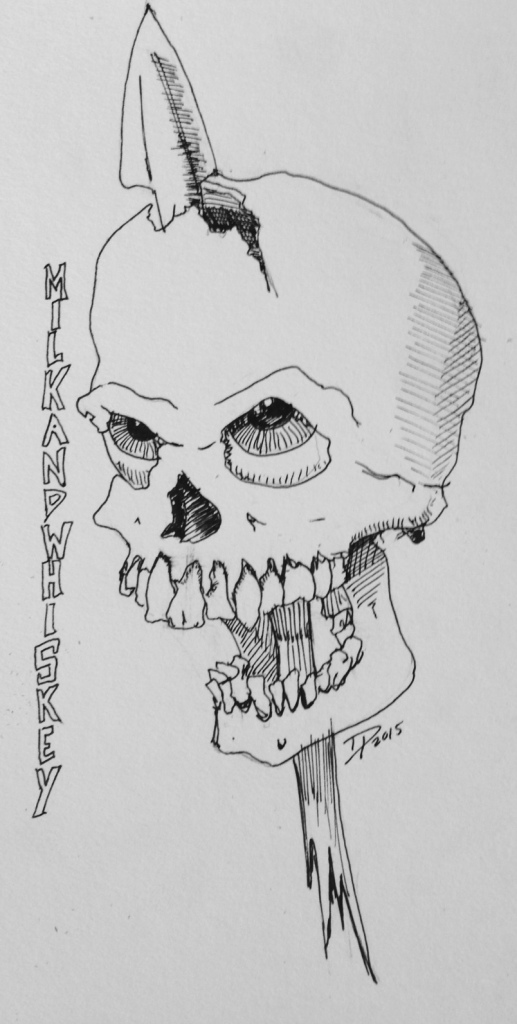