I heard somewhere that moving is on par with the death of a family member in terms of emotional stress. I’ll jump on that band wagon.

Our wacky Japanese step grandma liked to move almost as much as she liked to name cats “Mimi”. She’d lived in two countries, multiple times for both, and a lot of various cities – she changed zipcodes like she was on the run from the Yakuza. When we were kids, those times she was living in this country, helping Yoshi move was a guaranteed event most summers. Her husband, Grampa Joe, was just along for the ride and check writing. I imagine at one point he tried to intervene, but Yoshi was basically an unstoppable force of nature wrapped up in a tiny Japanese lady with coke bottle glasses. This is a combination tale of two of the moves that provide the greatest stories, and drove our poor father to drink.

Yoshi liked to move in the summer, it was like some migratory bird instinct kicked in and compelled her to start checking the real estate market. There were two initial problems with the summer thing. A: Its hot in the summer, B: Joe and Yoshi liked to live near US Air Force bases so they could shop at the commisary and eat at the Officers Club. For those unused to military living, they very rarely put Air Force bases in pleasant cities. The land you need for the airstrips is massive so they tend to put them anywhere hot-as-hell, freezing cold, monkey infested, or otherwise undesirable.

So one blazing hot summer day we loaded up a U-Haul with everything from the ceramic cat figurines to the Butsudan and piled in with dad for the drive from Stockton to Lancaster California. Both of these towns were probably never featured on Lifestyles of the Rich and Famous. Lifestyles of the Hot and Miserable, maybe. Prior to this, that month when Yoshi started looking for a new place, my dad lay down the law. “There is no way in hell,” he told our stepmom, “that I’m supporting your mother for another goddamn move. It ain’t gonna happen, so don’t even ask.”

The morning of the move, his wife was in bed with the flu.

“You did this on purpose!” he groused as he pulled on jeans and headed out to the uHaul at the crack of dawn. The kids were waiting for him in the front seat. No way we were staying behind with Pukey-mcPukesalot. We toiled an entire morning loading all the stuff from a two bedroom townhouse into a U-Haul with the usual amount of relationship testing snide remarks and arguments. Then it was time to set off.

Joe, Yoshi and Uncle Buck (no shit, not a pseudonym) took a car while our father got stuck with both the U-Haul and all the kids, plus a spare kid, our cousin. I’m not sure how this happened (or how we all fit), usually he’s smarter than that. So he got to drive a crappy rental truck with an AM radio, bad AC unit, and four tweens sharing two seat belts. This was the 80’s, so we didn’t get to fight over an iPad the whole way, we just fought. 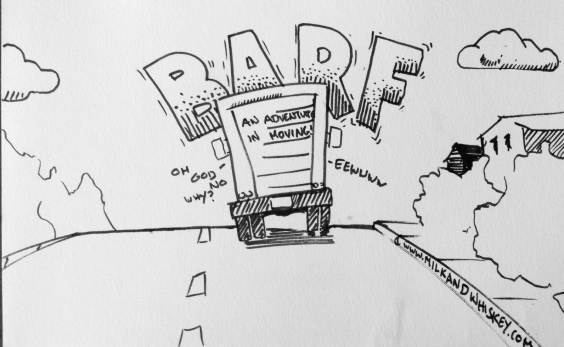 With hours left to go, our little cousin got carsick and upchucked her entire pancake breakfast all over herself. Then she started crying. Out of time and options, dad swung the uHaul into the parking lot at Casa De Fruita. Casa De Fruita is a weird roadside attraction that has gas, a diner, a fruit stand, a small zoo, and an algae choked pond guarded by aggressive panhandling ducks and peacocks.

MILK, Smokey and I all scrambled out and took off toward the petting zoo. Dad delicately carried the sobbing cousin over to the little duck pond, lifted her over the fence, and sat her right in the murky water. The ducks began to close in. Today, someone would have called the cops on him. Back then, in more sensible days, people just glared or snickered, depending on whether they had any experience with children, I’m sure. He got her cleaned up and wrung out and we were back on the road with a bag of dried apricots.

That little vein on dad’s temple began to twitch, which meant we should probably have played “slug bug” a little less violently. The AM radio did little to distract us.

We finally coasted the giant orange and silver piece of shit into the cul de sac where Yoshi had bought another tract house. No one was there to greet us. “Weird, I thought they’d beat us here for sure” Dad ventured. The house was locked to boot. Dad looked in the window, he saw a bit of furniture in the house but thought maybe they had some stuff delivered ahead.

“Joe must be driving,” Dad said and leaned against the shady part of the truck. “They’ll probably be here any minute.” Almost an hour went by and Dad decided we needed to find a pay phone and some air conditioning, as it was approximately a thousand degrees, and probably somewhere to buy a new shirt for Lil’ Miss Up-Chuck. She was starting to draw flies. We went to a strip mall and had hamburgers and cleaned up our cousin. Dad called home from a pay phone.

“They decided to go car shopping in LA,” our step mom replied, no doubt pleased with her plan to get the flu and her position a few hundred miles away from dad. “You’ve probably got a few hours.” This took dad’s mood another notch towards grouchy.

Dad took us to the movies. We saw something totally inappropriate because it was playing and the time was right.

Four hours later they pulled up in a new car. I seriously thought dad was going to come completely unglued.

Yoshi beamed, patting her new ride. “We went to LA and bought a new car for the new house! You like it? Guess how much!”

The vein twitched, well truth be told it throbbed. “Let’s just get this *&%#$%& thing unloaded.” Joe and Yoshi went to their new pad and unlocked it. We walked inside. There was furniture everywhere.

“Is this the right house?” Uncle Buck asked.

“Oh right, I forgot… I bought fully furnished. New house, all new furniture! You like it?” Yoshi clapped happily. All eyes looked at her. More veins twitched. “Guess how much!”

In the history of moving, no one has ever beaten my families time of unloading an entire U-Haul. Led by our dad who  basically had spiritually channeled Admiral “Bull” Halsey  He did it in record time without speaking to anyone. The kids did not have to be nagged to help, this was life and death and we damn well knew it. I’m amazed he didn’t just open the back door and punch it. I’m pretty amazed there was no punching period. “Well your yard sale is all ready to go,” Dad said and closed the truck up.

Yoshi was unflappably chipper. “You want to stay the night? It’s so late. I can make dinner!”

We all quietly got back in the and drove five hours home through the night in pretty much total silence. The only sound I remember was MILK. “Can we stop for pizza,” she asked.

6 thoughts on “A Moving Adventure”