Pumpkin patch massacres aside, Halloween was IMPORTANT to me, growing up. We did not half-ass it with store bought costumes. This may have been because we could not afford to. Poverty is the mother of creativity.

When I was about 7, I decided to go as a gangster. I wore a tiny, gray pinstriped suit my brother had worn in a wedding. I had a fedora. I carried a plastic tommy gun that made a clickaclickaclicka sound when I pulled the trigger. Oh, and a pack of candy cigarettes, because those still existed. Dad, the artist, had actually shelled out for a primo makeup kit and painted my lips cherry red and my eyelids an insane, sparkly blue-green ombre with black cat-eye liner. He even added a mole.

My eyes felt sticky and itchy, but I looked amazing. And badass. Like a seven year old Bonnie Parker. In Vegas.

When we hit the transformed playground at penninsula day care’s Halloween carnival, Whiskey’s friend came strutting over to say hey.

His friend, let’s call him Clyde, was also dressed as a gangster. He had a cheap, costume suit and a fedora and painted on five o’clock shadow. He did not have a tommy gun, and I didn’t like the way he was looking at mine.

We sized each other up. “You’re with me,” he said, trying to make his voice deep. Of course I was.

He held out his hand. “Let me borrow your gun.”

I sighed and handed it over. My friends cowered nearby but didn’t come over to say hi. Clyde’s reign of terror has already begun. 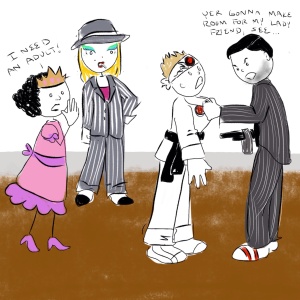 For the next seventeen minutes or so, Clyde terrorized the daycare. He stole candy from cats. He cut the line in front of princesses and fairies. He shoved and extorted and intimidated and generally behaved like an absolute freaking monster (or a gangster, I guess) while I followed obediently behind watching it all unfold (and maybe enjoying the power just a wee bit), until a teacher took away my tommy gun and made us sit on the curb.

While I sat and pouted on the curb, Clyde railed against society and adults and the man. Clyde was not a happy little boy, I discovered. He was also weirdly invested in his whole gangster persona. I suspect life took a dark turn for him after middle school.

When she let us up, the teacher gave me back my gun for the costume contest. I decided to separate myself from Clyde before he got me into real trouble…or decided to keep my gun. It was just Halloween, after all. We weren’t really gangsters.

I made the finals in the costume contest. I stood on a little stage next to the other kids as they counted down to the winner. It was between me and a girl in a store-bought bumble bee costume. All my giddiness from the morning came back. This was it. I never won ANYTHING, ever, but I was going to win this. There was no way they would give first prize to a $20 baby-costume over my home made awesomeness. I posed, I made my bad-ass face, I made my gun go clickaclickaclicka. 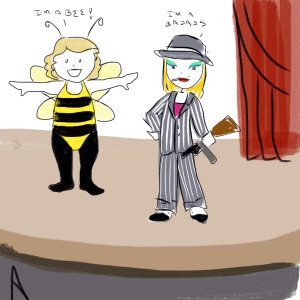 I did not win.

They picked the bee.

A freaking store-bought bumble bee. Over a gangster. It could have been that I looked tarted up in a slightly creepy way for a seven year old. It could have been the judges remembered my participation in Clyde’s reign of terror on the playground. I just saw, once again, obnoxious, pedestrian wholesomeness win out over individuality. 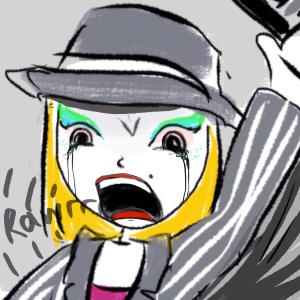 I went full Kanye, pitched a fit onstage and whacked her with my gun.

It was not my finest moment.