Most kids don’t get their first official haircut at 4 and a half. There are two reasons I’ve waited this long. The first is simply that I am pathologically cheap. Paying twenty-some-odd bucks so my kid could sit in a barber chair shaped like a firetruck to get her hair trimmed always struck me as a terrific waste of money. Especially when I knew she wouldn’t be impressed by a firetruck chair. Even as a baby she was impossible to impress. At 4 and a half, she is downright jaded.

The second reason is that I am a little afraid of my daughter. Not that she’ll stab me in my sleep or anything, but I’m terrified that she’ll have a class three meltdown in public and I’ll have to stand there watching her thrashing and frothing at the mouth and weeping like someone killed her puppy. I am in awe of these rare but impressive fits of temper and would do just about anything to avoid them. They defy logic, they are impervious to bribery, they are raw and messy and exhausting and just totally not my bag.

So her hair just kept getting longer (imagine that) and I kept it in check with an occasional bang trim. Then she saw Rapunzel and it was all over; even I couldn’t get near her with scissors. In no time, her hair was down to her waist and combing out the knots became a sisyphean task no leave-in conditioner could alleviate. The screaming, the tears, the swearing and gnashing of teeth – oy, I get a headache just thinking about it. And of course she didn’t like it either. 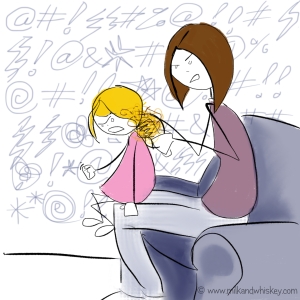 Then, this morning, she cracks. Out of the blue she agrees that getting her hair lopped off is a stellar idea. Before she can change her mind, I throw her in the car and haul ass to the hair place I’d spotted by Ross. It’s nicer than I expected. A little too nice. I see dollar signs. I’m almost relieved when Madz scrunches up her face and stage whispers, “It’s stinks in here.” I’m less relieved when she does her impression of the cat horking up a hairball. “Cough-erk-hack, it stiiiiinks! Gag-hork-ack.” I yank her back into fresh air before she starts spewing and we go next door to “Pro-Cutter” or something. Holy Shit, people. ProCutter is where the Emperor goes to get his hair did. And Gollum. And some other guy not right-out-of-the-movies, but very likely fresh out of prison. The guy cutting hair had a thirteen year old’s body and a fifty year old’s face, plus the hair of Sid Vicious, if Sid was on chemo. He looked up from the Emperor and shouted at us (in a very thick accent) what sounded like an order to return later. 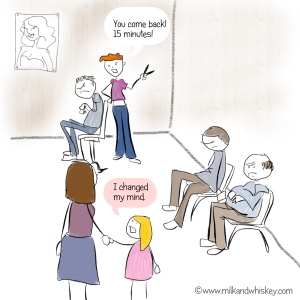 Oh Hell No. Madz looked up at me like I was solely responsible for the existence of a place this horrifying. Total 4-year-old disapproval. I could see it in her eyes, the: honestly, mom, what were you thinking?

Very reasonably, she says, “I’m not getting my hair cut. I changed my mind. I do that.”

“If we go home, you have to clean your room.”

I sigh. “Let’s try one more place. You can pick. And if you don’t like it, we can go home…and brush your hair.”

She considers. She nods. We head for downtown. Where the hell was the place with the firetruck chairs, I think, trying to mapquest and drive without killing us all. “Let’s see, there’s a place by the house that’s nice. And there’s the barber shop your dad goes to.”

That gets her attention. Dad is cool these days. “By your favorite store?”

“With the grapes and the crackers and the wine.”

So we go. She looks doubtful, but she likes the wine store. She is MY daughter, after all. I grab a bottle to get me through the next half hour. “What do you think,” I ask, as we close in on the barbershop.

“Let’s just check it out,” she says. We peer through the window. We go in. No movie villains, so we’re off to a good start there. A nice old lady pops out, makes the mistake of looking directly at my daughter, and welcomes us to her shop. Throws a booster on a chair. I hold my breath.

Madz hops right up and gets the first professional bad haircut in what I’m sure will be a long, long life of bad haircuts. It’s too short, it’s not really that even, but she freaking loves it. So what the hell. You look fantastic, kid. Remember when you look back on the pictures, you picked the place. 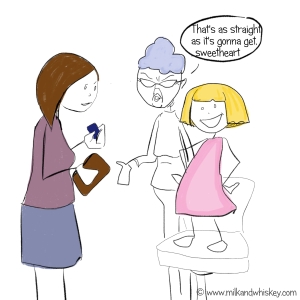