I, like many men pride myself on a good sense of direction, as far as my family goes this gift skipped our mom, and my wife, as well as her mom. For most of my life when I walk out of a door I turn in the direction of my destination, although for the first two months I lived in New York I was turned around because some joker put the ocean on the wrong side.

Getting occasionally lost is not necessarily a bad thing, and it can lead to some adventures and pleasant surprises. My father in law is a connoisseur of getting lost on the road, he actively seeks it out sometimes. He also is famous for running out of gas. He calls it “following your nose”. So be warned sometimes getting lost is just getting lost and may lead to a long walk with a can. Or at least a really long drive

His favorite story involves following his nose down a road in West Virginia and coming upon a car on fire. The car was parked across the gravel road from a dilapidated farm house. The entire population of said farm house was sitting on the porch watching it burn. He decided to turn around in case they decided to add his car to the evenings entertainment.

Once my dad took me fishing on the San Juan river in New Mexico for a couple days when I was fourteen. We had a good time, caught some huge trout and ate lots of hatch chili burgers. It was a great few days and we were worn out and ready to go home.

We piled into the rental car with our friend Harvey who was a local guy my dad knew, and headed out to the airport. The drive was a few hours, and we were cutting it close so the plan was to speed. Whoever was riding shotgun had a pair of binoculars to try to spot cop traps. A poor man’s radar detector if you will.

After riding in the car for about an hour and a half down two lane black top Harvey says “Hey either of you guys ever been to Mesa Verde Park?”

“nope” we both answered.

“Well too bad that it’s a couple hours drive in the opposite direction, because it’s really cool. They have these Native American ruins and there’s a whole town built into the side of a cliff. It’s really neat. It would have been worth spending an extra day, I wish I’d thought of it.”

As if on cue a sign appears “20 Miles to Mesa Verde Park”. We all looked at each other.

“Well I guess we ain’t making that plane.” My dad said.

We took the full tour of the ruins. They are really neat.

Sometimes the universe just sort of directs you into stuff you should do. This used to happen a more often before you could use satellites. Back when real men didn’t look at maps because that would mean having to fold one, and asking directions was pointless because you knew the other fellas didn’t read maps either.

Fun fact: The only reason they use paper maps in the army because you can tell whomever you outrank to fold it.

My friend Mike recently  reintroduced me to fine art of road tripping properly. His philosophy on the matter is that you budget extra time and always take the historical or scenic turn off signs. I’m starting to agree with him because last fall we drove from Albuquerque to Los Angeles.  We pulled off at a scenic sign at his suggestion and drove down a dirt road for two miles to find this view. 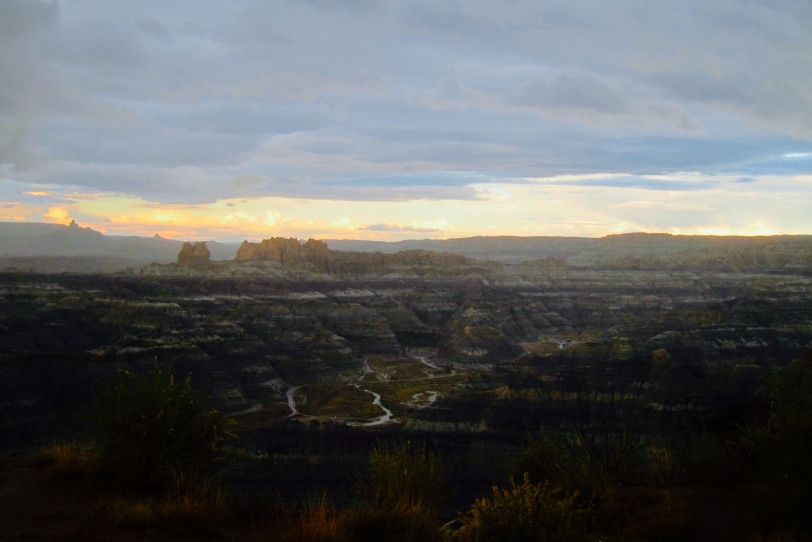 So there you go, now get out there and turn off the navigation system and follow your nose down some dirt roads. Just make sure you have enough gas.