Wait, so THIS is the Midlife Crisis?

I’m apparently having a midlife crisis. Getting a mohawk at 37 seems pretty midlife crisis-y, amiright? And now I’m letting a mad hairdresser put stripes in the mohawk in my living room during knit club. When I should be knitting – like a f*ing lady.

(Can we just take a moment to appreciate how badass knit-club is? One lady in my group is knitting what appears to be a chain-mail clutch. Is there anything more punk rock than turning string into clothing and accessories. Maybe electrical tape. Electrical tape, for reasons I can’t fully explain, is extremely punk rock. Despite electricians. These are the thoughts that keep me up at night.)

So yeah, first the mohawk, then the wacky colors, then the going to my friend’s indy-music shows and then my step-dad crashes into my mini-van trying to pickup some thai food and I’m rolling in this sleek, black rental with weird, automatic doors and suddenly it hits me that maybe this is what a midlife crisis looks like in America in 2015. Except my sports car is a minivan. Am I doing this wrong?

When I was an idiot teenager filled up on the nation’s abusively erotic obsession with youth, I assumed the midlife crisis was a last, desperate grasp at that fleeting specter. I thought the lady in line at Whole Foods wearing a miniskirt and UGG’s to match her tween daughter’s was mid-lifeing it, big time. But, while still very, very sad, that’s more a fashion crisis than a midlife. I don’t long to be young (unless I can go all the way back to 7). Being young was stressful and messy and felt like a constant grappling for adulthood and the sense of meaning that was supposed to come with it. 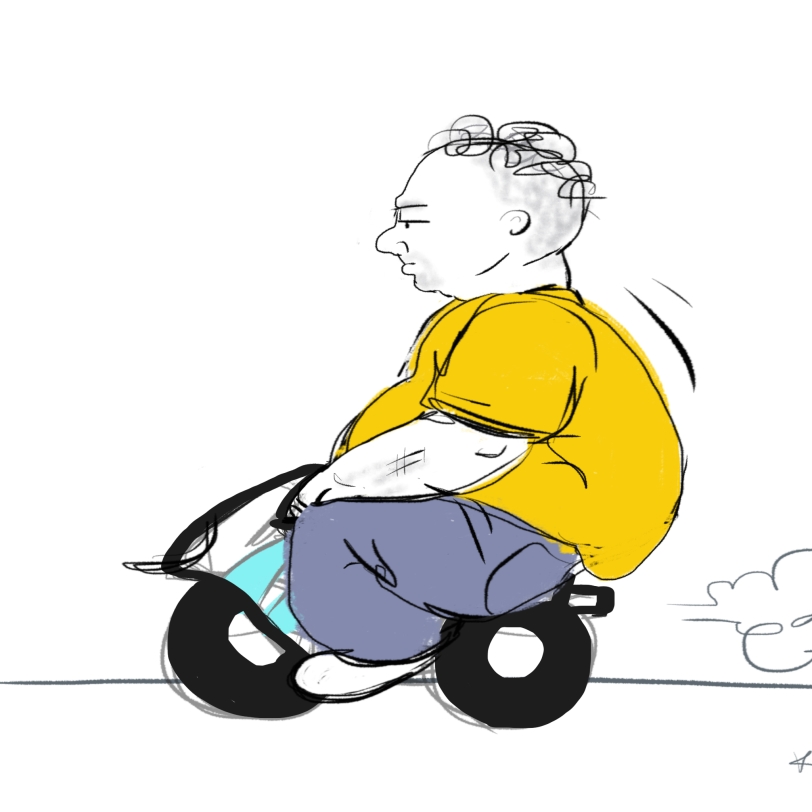 The fat old man on the minibike doesn’t give a rat’s ass that he looks ridiculous.

I assumed growing up meant looking the part. Being naturally strange I’ve spent a lot of years engaged in social camouflage, so sporting a bob and buying mom jeans just seemed like a natural next step. Look like the mom, be the mom. Maybe if I could fool the world into thinking me a responsible adult, the rest of me would catch up? But no.

My midlife crisis is less a clinging to youth and more of a cheerful nihilism. This life schtick is a tremendous joke, it says. You jumped through the flaming hoops and grabbed the golden rings and now you’ve been rendered pointless except to raise children capable of hoop jumping and ring grabbing. That’s not a very good joke, you say back, then tell the one about the guy and the cop and the penguin. And then you get a funny haircut.

Because not only is life a tremendous joke, it’s also pretty damn brief. Midlife isn’t whispering at me to reclaim lost youth, it’s slurring through the good scotch that being an adult means I get to do whatever small thing brings me joy in between bill-paying and chiropractor appointments.

I come from a long line of women who aren’t super concerned about acting like grown-ups.

That’s some serious first-world privilege, I guess, so I may as well enjoy it until the next phase sneaks up on me and I’m compelled to be the change I want to see in the world. I can already feel the social responsibility creeping in around the edges.

For now, if you need me, I’ll be upstairs watching SyFy and drinking the expensive booze.

5 thoughts on “Wait, so THIS is the Midlife Crisis?”