For those unfamiliar, there is a chain of schizophrenic discount electronic stores, each boasting an increasingly bizarre and unnecessary theme. Ours was built to look like an ancient Mayan temple…where you could buy vacuum bags or a VCR, or a washing machine, or gum.

“Oh, you’re going there!?” Someone will say, followed by, “Be sure you get exactly what you want because you don’t want to go there to return anything.” The room nods in agreement. “Great prices, but man…never return,” someone else mutters as a wave of customer service PTSD washes over him. “Never return….” he trails off. 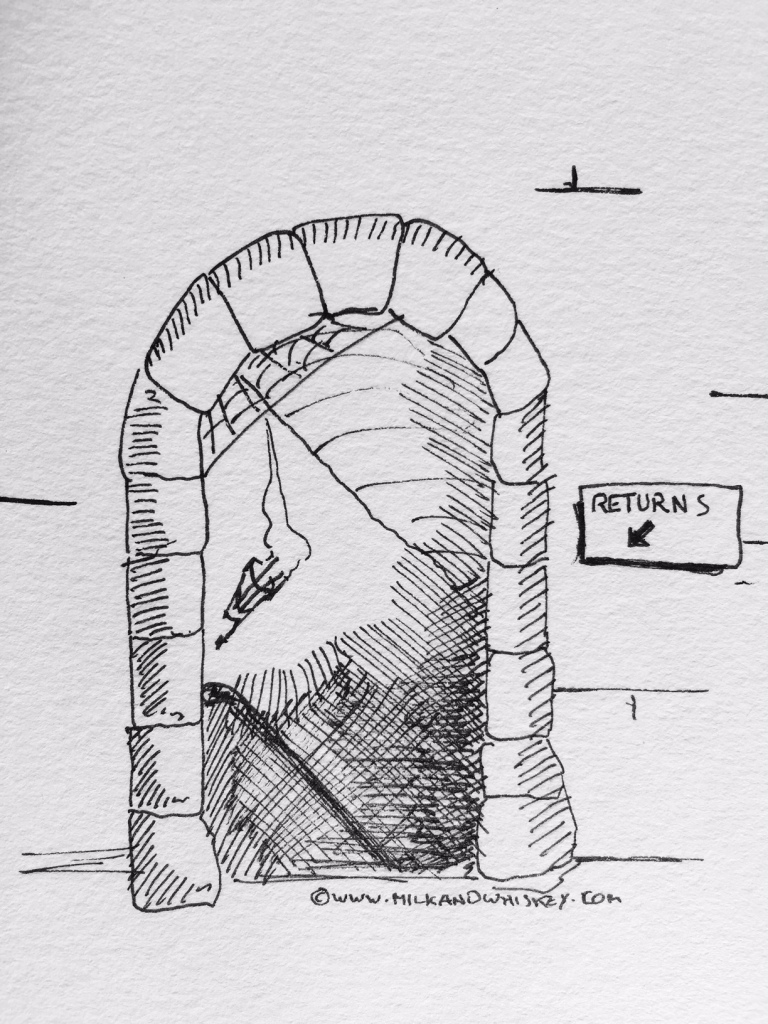 This company has a bureaucratic wall protecting them from returns and complaints that most airlines and phone companies consider legend. They only hire customer service “people” from the bowels of the most corrupt bureaucracies around the world. They also will take anyone who survived interrogation by Russian Special Forces without giving up any information, or refunds.You’d have an easier time buying back your soul from a crossroads demon.

So one time for Dr. Wife’s birthday I decided to buy her a new fancy stereo for the 1990 Volvo she was driving then. I got this idea while reading the Sunday paper and seeing an ad promising “Quick Free Professional Installment!” Lies. All of it.  That’s how they suck you in.

One crisp fall Saturday we went to the store to get the new stereo installed. The smell of pot was lingering in the work bay, but hey who was I to judge, maybe someone had glaucoma or something. The stoner finished showing us how rad the new stereo was and gave us a jaunty wave as we pulled away. The Beastie Boys rapped away our cares. That wasn’t so bad, I thought.

We were driving to her place and the sun, as it tends to do, began to sink low in the sky. This is when we discovered that the headlights in the car no longer functioned. We got off the freeway and hauled ass back to the store before they could close up on us. Other helpful drivers frantically flashed us with their high beams.

We pulled in just as our new pal/pot head was trying to close the rolling door.

Let’s just say I yelled at him a little. I demanded they put the old radio back, he said that was impossible – a deal had been made, there was no going back. He volunteered to fix the situation. I let him try. He was not up to the task. I got to practice yelling at several other demonic underlings just to get another work order for someone else to take a whack at the car.

Later that night, with an appointment slip for another go at the installation, we drove home to the sound of the door ajar bell dinging its merry heart out in stereo surround. If they couldn’t kill us directly, they’d drive us to suicide. At least the lights were working. When we pulled in I popped the hood of the car to disconnect the battery. We both looked at the car and backed slowly away.

The next day we had coffee and steeled ourselves for battle. I dealt with deflective answers such as “why do you want to return such a fine item? We can’t put your old stereo back are you crazy?” and “there must be something wrong with your car,” and the classic, “Sir, take a number and quit shouting at me.” Actually getting service or a refund at one of these stores requires the kind of determination Vietnamese grandmothers show at the fish and meat counter – elbows will be thrown.

My wife finally pulled me away from the counter by my arm; I tried to hang on but the little chain on the pen snapped. I sunk into an intentionally uncomfortable chair next to a man who clearly believed soap was optional but low prices were mandatory.

After a week and three more attempts by three more “installers” and me threatening to threaten them with legal action, I had my chance. I spotted a man walking through the store who was obviously above the normal rabble because he was flanked by a couple kiss-asses frantically typing on black berries. They were escorted by one of the managers I had previously tried to eviscerate verbally. A VP touring the facility no doubt. I pounced.

I cornered the guy in front of a lot of customers, I was waving reams of paper and opened with “we could have been killed” regarding the headlight thing. He calmly spoke to the manager as one would speak to a child. An hour later I was at a speciality installation bay at an unrelated location which is where they apparently subcontract someone who actually knows what they’re doing.

A half hour later I had working radio and a fully functioning electrical system to go with it. The guy even tossed in a set of better speakers that he’d pulled off another car.

We drove away triumphant. We had seen the worst and we had beaten them. I was ready to haggle for anything, want to buy a rug in Morocco, used Corvette in New Jersey?

A month later we moved to New York and someone (or something) smashed the window, disemboweled the dashboard and walked off with the radio.

In its place, a lightly burnt Fry’s receipt and the smell of sulfur.

One thought on “Getting Fry’d.”