The Worst Dog Ever.

When we were very young kids we had a great dog. His name was Reubens, and he was a large Samoyed who was a loyal valued member of the family until the end. This story is not about him. This is the tale of Shiro, the terrible understudy. Shiro was another Samoyed, our family pulled the time-honored tradition of replacing the dead dog with another dog of the same breed so you don’t have to change the pictures on fridge.

The new dog Shiro was a Samoyed puppy when we got him, and of course he was the cutest thing on the planet so we all loved him. Shiro was free, because he was the runt of a litter and contrary to what heartwarming tales of underdogs becoming hero’s teach us, the runt gets all the bad genetic material. This dog was a thief, a pervert, a glutton, and a traitor. Not normally traits one seeks in a family pet.

Initially we forgave the usual bad puppy behaviors, pissing on the rug, chewing things etc. We assumed he would outgrow all of that and with training become a perfectly acceptable dog. This was not the case.

The older Shiro got, the worse of a pet he became, it was like he was born to give his breed a bad name. He never stopped peeing and pooping in the house altogether, but rather he gave the illusion of attempting to be potty trained. He would save his “accidents” for acts of petty revenge or domestic terrorism

The dog or “damned dog” as he was more often referred to was also blessed with one of the most impressive digestive systems the world has ever seen.

When Smokey and I were paper boys Shiro once got into our supplies and ate an entire bag of rubber bands. We switched from the usual worn nine iron and neighbor’s fence method of disposing of dried turds to a stick with a bent nail on it for a week.  We later considered dipping another bag of rubber bands in barbecue sauce just based on the convenience.

Another time the wretched beast ate some tube socks. We only learned this because at a cookout our family threw he wandered by with 10 inches of sock hanging out of his back door. At one point a family friend’s little girl shouted “daddy that doggy has two tails!”  The next time he sat down my dad put a foot down on one of the “tails” and when the damned dog went off to break into a car or something one tail stayed put. Kind of like a furry lizard, our dog could drop a tail if needed and survive.

One Sunday my father brought home a full-sized apple strudel from a local bakery that was still steaming hot as a nice surprise for the family. In the two minutes it took him to set it on the kitchen table and walk down the hall to wake the kin, the furry bastard leapt onto the table in a display of athleticism that no one who knew the lazy runt thought he was capable of.

When I followed my father into the kitchen rubbing the sleep from my eyes we saw him. Clear as day the larcenous cur was standing on the table eating our strudel. My dad hollered, and instead of scrambling like any normal pet caught in the act, the greedy thing started wolfing down the hot strudel as fast as it could as the old man closed in on him. Have you ever heard a dog both gag and yelp at the same time because it was eating a hot pastry too fast? It sounds like a belch that’s gagging and yelping at the same time. Yet he kept at it. He was already in deep and he was getting all he could.

Shiro was even a pervert. Every time someone else brought their dog around he would mount it, regardless of sex. He would also pleasure himself constantly in front of the TV so he was sure there would be an audience.

I’m pretty sure he told lies that would make a fisherman blush, but I don’t speak dog so I can’t confirm this one.

Then there was the moment he betrayed me.

I hated asparagus when I was a child, and if there is any job that a dog should perform, it’s the clandestine disposal of food underneath the family table. He either screwed that role up or he planned it. I was being forced to eat my vegetables in full view of the entire family. I used the time honored technique of slipping my vegetables under the table to a dog ease the torture forced upon me by misguided folks who thought I needed some crap called vitamins.

Shiro greedily accepted every asparagus that I slipped into my napkin and then dropped for him. We had a great arrangement until he exploded. Apparently feeding a Samoyed an entire serving of asparagus with butter is not a good move. For a while I was in the clear, sitting calmly with my family and putting on a good show of having eaten all my vegetables. Then from beneath the table came this horrible noise, and the dog projectile vomited asparagus all over the kitchen. Everyone stared in disbelief, then they all looked at me. I had to do the dishes by myself all week, and was now watched more closely than ever for vegetable shenanigans.

Then one day he moved out. Not many dogs in suburbia have pulled that trick off. Because he felt no loyalty to us, every time a gate was left unlatched he would split. Hell, if you took him outside without a leash half the time he was gone in sixty seconds. You’d be standing there yelling his name, and he would do the dog equivalent of flipping you off and would run like hell. Once, our step mom took him off leash in the snow. It took Smokey and I the better part of an hour to find a white dog in the snow and corner him so he could be leashed again. 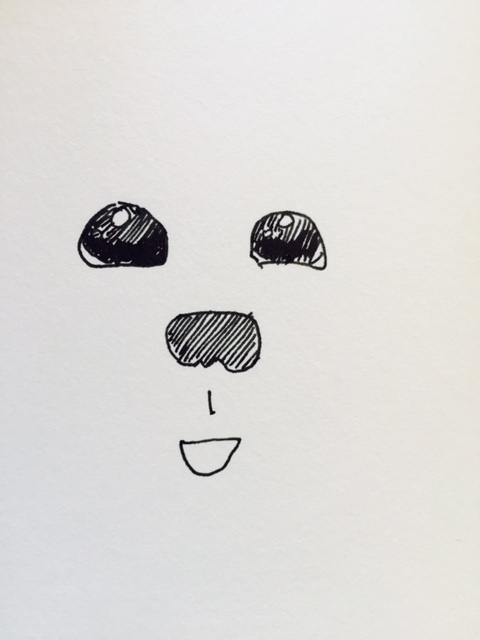 At first we thought his wanderings were pointless dumb dog behavior. However after a while he kept returning to the same house a couple of miles away. We would get a call, and my dad would drive over and pick him up again. “What took you so long?” The dog would silently say to my frustrated father.

The third or fourth time he went there Shiro was being washed and brushed by a couple of little girls who had started calling him “Snowball”. Well, long story short we let them keep Snowball, it was better for everyone. We walked by their yard one morning and he pretended to have no idea who we were.