A PREFACE BY WHISKEY: So my sister falls ass backwards into a traveling cooking show and gets to bounce around Central America for a bit. This is on par with her getting new bikes for Xmas, or the horse, or all the other magical stuff that rains down on her while I get to go film meth addicts in the Palm Desert. Well jokes on her. This will be the last touching mommy-blog type stuff for a while. Get ready for Whiskey and MILK. As a courtesy I will publish her last article. Because she can’t, because she’s in some Banana Republic somewhere where the internet involves tying a note to a Toucan’s leg.

So without further ado…

It’s finally happening. I’m abandoning my own children. I don’t think anyone saw it coming – them least of all.

Yesterday, I left for a a business trip to Guatemala, Panama, and Trinidad & Tobago. You know how stay at home moms go on vacation? We get jobs.

The closest thing I’ve taken to a “business trip” recently is a little weekend writer’s retreat I call Bread & Cigarettes. As in, “I’m going out for bread and cigarettes (and never coming back).” It’s two nights, the kids barely survive it.

This time, I’m leaving for two weeks. Two weeks away from my kids. Two weeks of my husband, the engineer, being solely responsible for the lives of those same kids. Cue ominous music.

The man hasn’t cooked dinner in seven and a half years. Mostly, because he uses habanero peppers like most people use salt, so he’s been banned from the kitchen until he learns to respect other people’s digestive systems.

All tiny clothes are a mystery to him. He honestly cannot tell the difference between 2T and a 6X. It is very likely that my kindergartner will be wearing toddler leggings to school. She knows the difference, but she doesn’t care.

These are small things, of course. And it’s not that he can’t cook or supply clothes or whatever. That’s all day one stuff, first page of the SOP for parenting. The hilarity will come the first morning he has to get the kids up and fed and dressed and collected  ON A DEADLINE. The slowness with which these children move in the mornings is staggering. Madness can be sitting on the set of clothes I put out for her and still fail to find her socks. She is shocked anew, every morning, that her homework has not magically put itself in her backpack. That her shoes have not clamped themselves to her feet. And I, in turn, am consistently surprised to find that we’ve walked out the door and to the car without either. We are slow learners in the MILK household. That’s about when J-lark poops her pants.

The Engineer works. The Madness is in kindergarten. The Jo…well some days she has preschool, but other days not so much. There are piano lessons. There  are things I’ve forgotten about that will baffle him. There might even be a field trip somewhere in there. He will have to pack a lunch. He will not know this. He will be late to work. Every day. The kids will be dressed strangely. Their hair will probably not be brushed, because it has to be done just so or they tear off and hide under beds. It’s like trying to bathe a cat.

All of the moms have offered to help.

“I’m not completely incompetent,” he said, “I can take care of my own kids without help.”

“Oh, good. Maybe you could get the little one potty trained while I’m gone, then?”

Before I even left the house, the two year old locked herself in the bathroom. The windowless, second story bathroom of her grandparents’ house. The Engineer had to kick down the door.

It’s harder that you think, kicking down a door.

An hour after I left, still sitting at he airport waiting to board an exceedingly uncomfortable United flight in the cheap seats, I got this picture. 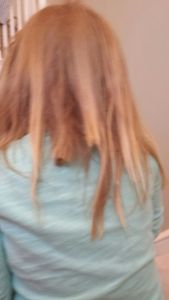 According to the Madness, “She was asking for it.”

I’m headed into the parts unknown (to me) to film a pilot for a cooking/travel show that is going to be wildly awesome…and yet it seems my husband is the one in for an uncomfortable adventure.

Perhaps I should have left him some of the Pepto Bismol.