When I was a teenager, I (like many many of my cohorts) had a Sega Genesis. Actually, I just got mine back from my mom’s garage which is what triggered this memory I will now bore my tiny limited audience with. Wait don’t glaze over yet!

There used to be a subscription service called Sega Channel where you paid a monthly fee to the cable company and you got a bunch of games streamed into your Sega Genesis. Sound familiar? It was brilliant, and I had to have it. Mom needed a little more convincing.

Three days of power whining and cajoling later, we drove to the cable company to pick up the device that you plugged into the cartridge slot.  For those of you that have never been, the physical offices of the cable company are usually on par with the DMV for a certain Joe vs The Volcano ambiance. We got home and my mom went off to do whatever, and I went to hook up my new toy and play ALL the games.

The device looked almost like a miniature Sega Genesis that plugged into the original console, sort of like when the Space Shuttle dry humps a 747 so they can move it. The new device had lots of vents cut into the side for cooling. For a split-second, light from an open window passed through the vents and I saw something move inside.

“Mom, holy shit, mom!” I yelled. She ran into the living room, unlit Benson and Hedges at the ready. “What’s wrong?” She asked. “There’s something alive in this thing!” I replied. I’m pretty sure she muttered “Oh, fuck”.

In a rare moment of perfect emergency response and composure, mom ran  to the kitchen and grabbed a one gallon plastic storage bag, ripped the device off the Sega and sealed off the problem. She carried the bag away with the dignity one musters to transport a bag of dog poop.  She went into the garage and set it on the car hood. We went back inside.

She took a deep breath, and lit the cigarette to calm her nerves.”Was it a cockroach?” She asked. Mom, like most women, ranks cockroaches next to a small-pox outbreak in severity.

“I don’t know, all I saw was something move” I said.

“Well, I guess we have to take that thing back” she said.

“But I musssst have the precioussssss,” I hissed, retreating to the shadows.

“What? Gross spit that out, where did you get a live trout? You know I hate prop comedy,” She scolded.

I went into damage control. “We can take it back,” I said, “but lets please just exchange it, not do anything crazy…like not have video games.”

“Ok ok, but only if it’s a brand new one in a factory sealed box,” mom deadpanned.

We walked into the garage and both froze.  The plastic bag that mom had chucked the Sega Channel into was teeming with cockroaches, they were streaming out of the box and clawing uselessly at their transparent plastic tomb. They apparently did not appreciate being on the hot hood of mom’s Honda. It looked like a miniature biblical plague.

Mom gagged, then she composed herself…then she gagged. I put the roach circus into a large paper bag so that mom couldn’t see the little guys and we drove back to the cable company, trying to ignore the sound of their desperate scratching.  We got there and handed them the bag like it was… well like it was full of live roaches.

The cable company drone looked at the twitching paper back with remarkable disinterest.

“Cockroaches?” The guy asked after a quick glance at us. 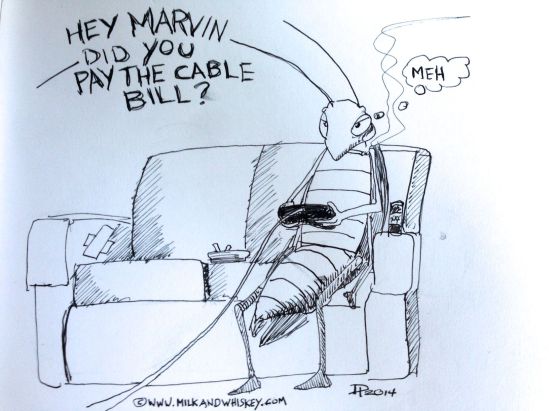 Cable boxes come back from some pretty nasty houses.

“Cable boxes and accessories come back from some pretty nasty houses,” he answered. “You want a brand new factory sealed one, I’m guessing”

“Please,” mom looked like the walls were beginning to close in and they were covered in plague.

We left with my new factory sealed prize.