Our parents may have divorced, but our dad didn’t disappear the way some dads do, leaving nothing but an ass-print in an easy chair. Hell, some dads disappear without ever leaving the house, butt still firmly in chair. Our dad was determined not to be an every-other-weekend dad – the clueless guy at the mini-golf place with two kids too old for mini-golf. (But can you ever really be too old for mini-golf? No. No you can’t. My brother still plays mini-golf on business trips.) My point is, he might not have been there every day when I got home from school, but we knew he’d be there when we needed him…unless there was a game on, and then we knew he’d be there in, like, ten minutes. As soon as there was a commercial.

Actually, sticking around was the first lesson…and probably the most important. But it’s not in this list. Let’s just call that one a given. Dads should stick around. Right? Moving on. I give you the top nine formative pieces of dad wisdom I’ve tucked away over a lifetime.

1. Either Climb Down or Jump, But You Can’t Sleep on the Roof.

I was always determined to do whatever my brothers were doing. Being two years younger, this usually meant I was attempting something outside of my actual, physical capabilities. Such as climbing the tree next to the house to get onto the roof because, for some reason, almost every activity my brothers came up with involved either going dangerously fast, or getting dangerously high (yes, this continued into their teen years). Or lighting things on fire.

The thing about climbing, going up is a lot easier than getting down. Well…maybe not easier, but less terrifying. So the day I followed too closely behind my big brothers and got myself stuck on the roof, I wept. The boys went and got Dad. Dad came out and surveyed the situation. He’d been raking that morning so there was a big pile of leaves under the awning. “Guess you’ll have to jump,” he deadpanned. That’s it. No sympathy, no fire department. I was stunned. He was supposed to save me! It was his JOB! But there he was, just staring at me and waiting. I’d gotten myself into a shitty situation, there was only one way out of it, and there was no sense dragging it out. So I jumped. It hurt, but I lived and I didn’t break my legs. Easy or not, when there’s only one way forward, you take it.

As a side note, within minutes of my jump, the boys had made a game out of jumping off the roof and rolling with the fall like amateur ninjas (Who says the French invented Parkour?). In retrospect, I bet he wished he’d just gotten the damned ladder. 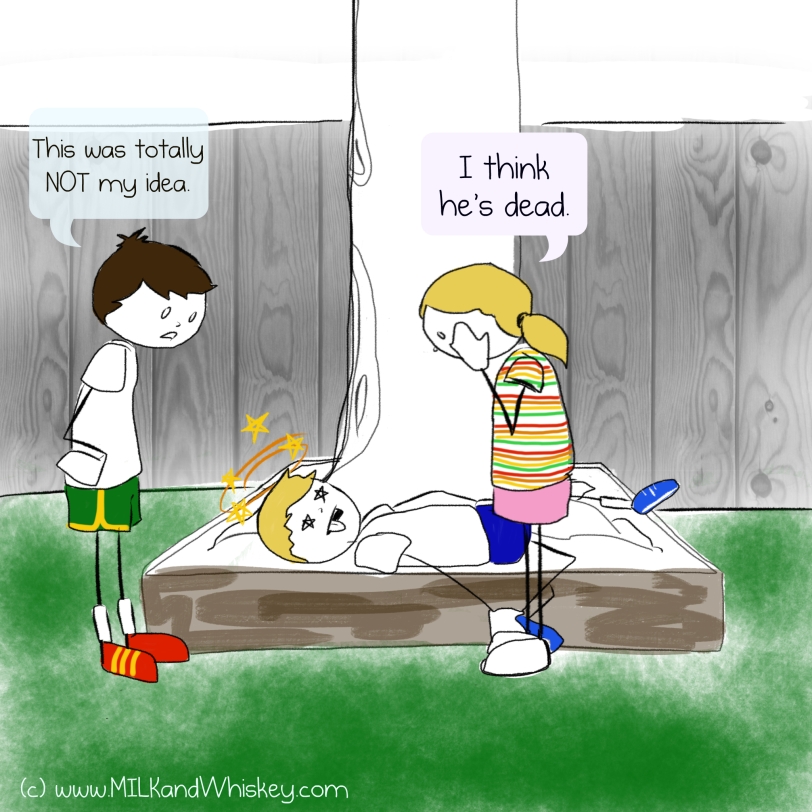 Just another unsupervised afternoon at Dad’s

This was one of those random lessons imparted seemingly out of the blue, on a drive home from school. As I understood it, he’d come quite close to getting into a fight on the golf course that day – hard to imagine how that could happen, isn’t golf supposed to be relaxing? No?

“Kris,” he said, “most people don’t really want to fight. They want to yell and make a scene and stomp around, but MOST people are afraid to actually throw a punch. When they finally do muster up the courage, they throw this half-assed punch that just pisses the other guy off. I’m not saying you should fight, it’s almost never the right move, but if you DO need to fight someone, throw everything you have into that first swing. The faster you put him on the ground, the faster you can get the hell out of there before the cops show up.” He paused thoughtfully. “Of course, no guy is gonna call the cops because a girl kicked his ass.”

3. Why Are You Still Talking?

This, I learned from all the times my dad just sat there looking stern while the boys incriminated themselves in the awkward silence surrounding whatever just went horribly wrong. Whiskey couldn’t NOT talk to save his life. I didn’t speak until I was three just because it was impossible to get a word in edgewise. Turns out, the ability to sit in thoughtful silence is a great way to avoid looking like a dumbass. And, sure, it can make other people uncomfortable when you don’t engage in the rituals of meaningless blather, but that just brings me to point number 4.

4. Any Idiot Can be Likable.

I’m probably not the first to suggest that my dad learned his management technique from Machiavelli, though, I’m not sure he ever gave it that much thought. The simple truth of the matter is my father comes from a family that puts high value on wit, and almost no value on emotional health or “social skills.” The closest you’ll get to an emotional outburst from my dad is a drunken round of  Oh Danny Boy at an Irish Pub. In 1976. But, when I was dragged to work parties, I always enjoyed the vaguely fearful tone in people’s voices when they met me and said, “You’re HIS daughter?” Now that I think about it, this may be one reason I have so few friends. Still, respect is underrated these days…possibly due to an excess of likable idiots. 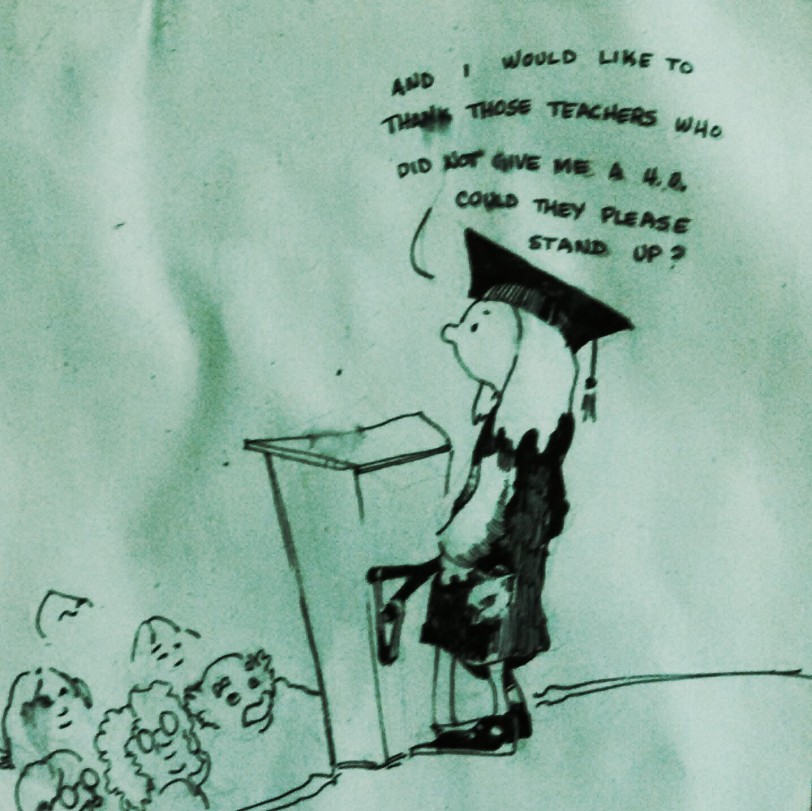 From my 8th grade graduation card

People often comment on what a “relaxed”  mom I am. I’m realizing it might not be meant as a compliment. Just because I’m not freaking out doesn’t mean I don’t care. My dad was a climber, he made climbers out of us, and now I’m raising climbers of my own. Climbing, like life, is dangerous. The better it is, the more dangerous it gets. Pretending it’s not dangerous would be stupid, but not doing it would just be crazy. So I’m coining a term – the parenting style I learned from my dad is called “On-Belay” parenting. You shouldn’t stop your kids from climbing, you can’t climb for them, and you can’t haul them up the side of the mountain by a rope…well, you could, but that just sounds uncomfortable for everyone. So you stand nearby, you keep your eyes open, and hopefully you’re ready when they fall.

Of course it helps if they announce the whole falling thing. With words. Because you might have chosen that moment to grab a beer. More on that next. 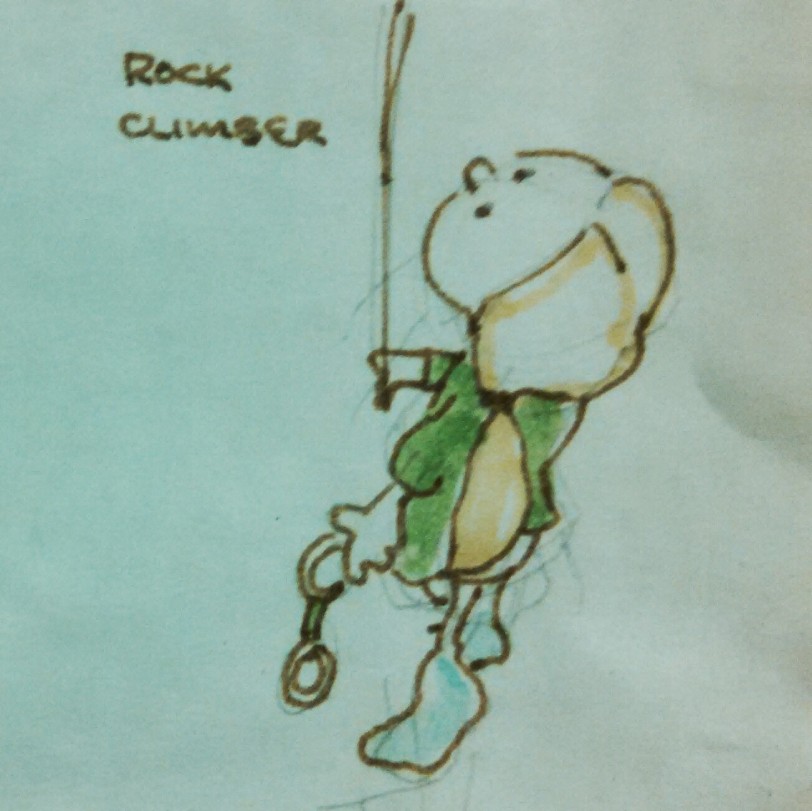 You can see where I get my illustration style.

6. If You Want Something, You Need to Ask For it. With Words. Possibly Twice.

My dad never understood about tucking kids in. I would say goodnight, give my goodnight kisses, and then go climb into bed. I would wait. I would wait a little longer. And then I would get out of bed, drag my sleepy ass back into the living room to interrupt Doctor Who and patiently remind my father that he was supposed to tuck me in. Little kids need tucking in, I would explain for the umpteenth time, and then walk him through the routine yet again. It was so simple, I thought, how could he not be getting it? This early experience with man-training has proven invaluable in later relationships. So much unhappiness can be avoided with actual communication. If you’re vague about your needs and your guy doesn’t step up, he might just be dense. If you’re clear about your needs and your guy doesn’t step up – kick him to the curb, you don’t need that shit.

7. Don’t be Stupid…Okay, be a Little Stupid, but Don’t Get Caught. If You do Get Caught, Lawyer up Quick.

This is another one I learned from watching the boys, as much as I learned it from my dad. I almost never got caught. Of course, with the boys around, who’d bother looking at little old me? I once sat on the couch drinking a Kamikaze while my dad raked my brother over the coals for drinking in the house – in front of his little sister. To his credit, Whiskey didn’t sell me out.

Of course, in our family, no one likes a rat. 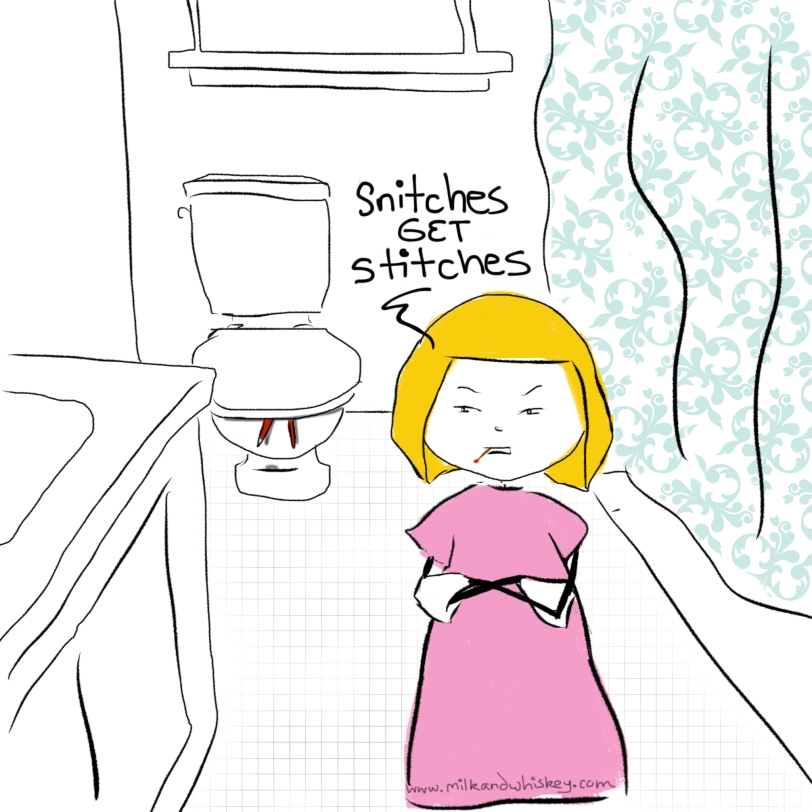 Tattle-tales don’t last long here; We don’t even like the Elf of the Shelf.

8. Stop Screwing Around and Commit Already

This is a lesson I didn’t realize I was learning until Dad spelled it out for me – possibly because I’d already learned “cut and run” so well from other influences. The Engineer and I had a long and complicated romance with a lot of pauses due to me forgetting rule #6 and focusing a bit too much on rule #4. So there I was, pushing 30 and thinking of getting back together yet again because The Engineer had a job interview in my city, and it seemed like a sign from the Gods. I was vacillating and talking about it with my dad, who probably didn’t want to think about it any more than he had to. He said, “If you’re going to do it, do it. But don’t do it because he’s in the same state. You have to be willing to make it work even if he decides he wants to open a Fly Fishing shop in Idaho.” The Engineer didn’t get the job in California. I now live in Washington and, in a way, my mom & step-mom have my dad to thank for the fact that they now have Grandchildren.

Side note: Also back when we were in high school Dad suggested that Whiskey should probably take a moment to talk to the ludicrously pretty girl who kept hanging around the house for no obvious reason. Later, Whiskey would marry her and create even MORE Grandbabies. For such a logical guy, Dad has proven strangely adept at relationship advice. He should have a column.

9. Safety is an Illusion

When my dad couldn’t keep my brother off the roof of our house he was reshingling, he let my 3 year old brother climb up the ladder, and then he tied him to the chimney. Not like a damsel on the railroad tracks in a silent film, just secured with enough rope to walk around a little but not hit the deck should the kid wander off the side. It occurs to me that we have a lot of faith in ropes, as a family. So obviously Dad’s idea of a safe activity varies wildly from Mom’s idea of a safe activity. That said, Mom broke her wrist roller blading (while wearing wrist guards, btw) on a gently sloping paved trail.  The only times I’ve seen Dad in the hospital are when his own body tries to kill him from the inside.

All dad’s lessons really stem from that simple truth. The world is not a safe place, and no one gets out alive. So watch your ass and the asses dear to you, but you may as well go out and have some fun. Then, when you do get hurt, at least it makes for a good story.