That Time I Almost Learned Geography

I’m currently in the process of picking a kindergarten for my kid. What sounded simple enough five years ago has turned into yet another parenting moment that looks like the MOST IMPORTANT DECISION EVER. Kindergarten…I don’t even remember kindergarten, so how important could it possibly be? Don’t answer that yet, I’m just getting started.

People keep telling me how much school has changed since I was a kid. They say it with fear and awe in their voices, but I gotta think anything would be an improvement.

All I remember about first grade is crazy Mrs. Holmes, who shut naughty kids in the cloakroom…and also used the term “cloakroom,” which is about as crusty-old-fart a term as I can imagine. I remember she didn’t like the way I drew hats and faces on all of my 5’s. She was vehemently opposed to accessorizing numbers.

I remember, in latter grades, reading Tom Sawyer three times because of changing schools and running smack into the same curriculum over and over. Whiskey read the Rats of Nimh so many times that in sixth grade he flat out refused to and demanded his own book. He chose Catch 22, which was probably above the teacher.

I did so well at all of these schools, that my parents probably assumed I was getting a top notch education. I was not. At the end of eighth grade, I was accepted to a specialized magnet school. It was science focused, I think, claiming to be designed for the pre-pre-pre-med-set. I would probably have been shockingly ill-equipped for it, in reality, but the universe saved me from my own aspirations. Mid-way through summer, mom realized that I would have to take public transportation to get to the school.

My mother is afraid of many things (driving at night, parking next to vans, carnival people), but the city-bus tops the list. She feels it’s a rolling combination of a Hell’s Angels initiation and public urinal.

So she yanked me out of the path of imminent danger and registered me back into my home school – one of the largest high schools in all of California. About four thousand students, socio-economic diversity like you wouldn’t believe, and occasionally whole school days cancelled on account of gang violence. The lockers had been decommissioned because of drugs and weapons, and no one was allowed to wear red or blue clothing…except on spirit days, because those were our school colors. But at least I didn’t have to take the bus. Thank God.

Except that oh wait I did take the shame train. Because funding got cut for that school’s busses, too. Irony.

(Whiskey on the other hand had a bus pass. But he lived with dad and, along with Smokey, ran a small crime empire at an equally well run California school. That’s another story. And also further proof of the kind of people who were taking the bus, so…mom wins?)

But I digress. The thing about being a last minute addition to an enormous school, is that they just kind of stick you wherever, as long as it fits in their grand plan. Freshman year meant geography, so along with a lot of other last minute additions, I was placed in an already overflowing geography class.

The first week was spent learning the names of every country in Europe and Asia. As it happens, I’d somehow managed to miss learning any geography at all, up until this point. As in, even MY country’s. But I studied my ass off. I learned the name of every piece of the puzzle that Russia had cracked into. I was ready to finally, finally, get that great free education America had promised me. This was the moment my determination to succeed was meeting my untapped potential for knowing stuff about stuff.

The day before the test, I was transferred to a new geography class along with all the other misfit kids who came late to the party. New geography class was being run by the home-ec teacher, Martha, because home-ec lost funding. Or interest.

Martha was not prepared for this. My geography education immediately devolved into a kindergarten style “experiential” learning where we made food from a few different countries and kids led the discussion with poorly researched presentations. 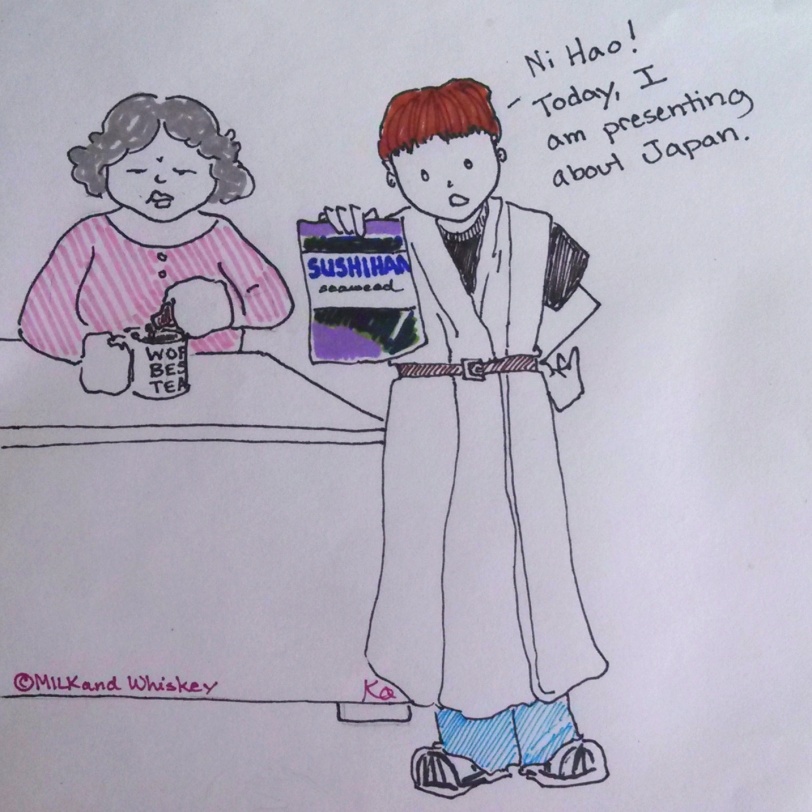 Cut to the future, when I married into a family that takes geography quizzes for fun. FUN.

It isn’t easy to be this smart and this dumb at the same time.

And THAT is probably why I am stressing out this much about where I send my kid to kindergarten.

3 thoughts on “That Time I Almost Learned Geography”