Jimmy was a racecar driver who didn’t like to be called Jimmy. So nobody called him that. Except for Whiskey and I, when he wasn’t in the room.

I’m sure to our single-mom, Jimmy looked great on paper. He was rich, for starters. Maybe not by  San Francisco standards, but by sometimes couch-surfing with friends standards, the guy was loaded. He owned his house, drove a custom built BMW, and he bought my brother and I an actual video game console. This was a big deal back then, in the days before babies came out of the womb holding smartphones. It was an Atari, loaded with about three mind-blowing video games, and it was specifically designed to keep Whiskey and I shut quietly in our room as often as possible.

Psycho Jimmy didn’t actually like kids, it turned out. He did like boarding schools. Which, in retrospect, might not have been the worst thing in the world. We went to some pretty middling schools, to be honest.

Anyway, like most psychopaths, Jimmy was charming as all hell right from the start. And mom, having cleverly divided up childcare duties via a new method known as “divorce,” only had kids a few days a week. The rest of the week, she was free to be wined and dined and driven to exciting places in a very fast car. You can see how a girl would get caught up. 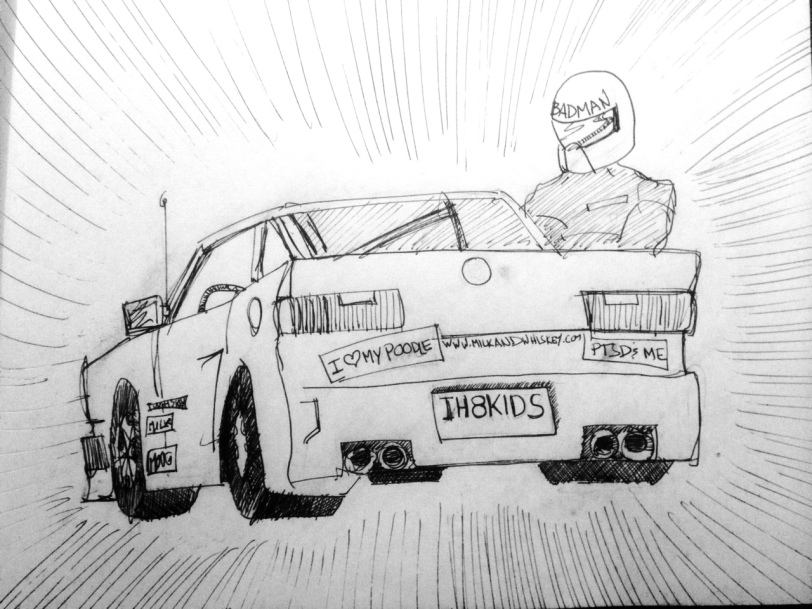 In retrospect, the license plate probably should have tipped us off…

I’m not sure how long they dated before Psycho Jimmy opened his home to us poor waifs, but it became immediately clear that all of us had ended up with more than we’d signed on for.

Jimmy had hoped for a hot, blonde girlfriend who would be open to his dictating every waking moment of her life, for her own good. He had strong and urgent opinions about clothing, tan-lines, and the proper doneness of spaghetti. He had a LOT of rules. About everything. And a man with a lot of rules and no one to impose them upon, must be the saddest man of all.

Mom, on the other hand, had us.

This was not destined for happily ever after. Here’s a quick sampling of the crazy:

RULE 1: “No cats in the house. Ever. EVER.” Jimmy had a fluffy little mop of a dog called Muffin. No shit.  We had a big, all-black cat named Spot. Spot the cat. He had a dog’s loyalty to our family, but he was no dog. And he wasn’t an indoor cat, either. He was more the try to impregnate the neighborhood, come home with another cat’s claw in your eye and a piece of your ear missing, “you should see the other guy,” kind of a cat. Muffin was wisely terrified of Spot. Jimmy was terrified of fleas. Every other day, I would smuggle the cat into the house and up to my room. Jimmy would find out, and mom would have to give Muffin yet another flea bath. Spot didn’t give a shit. Spot was the honey badger of Palo Alto. 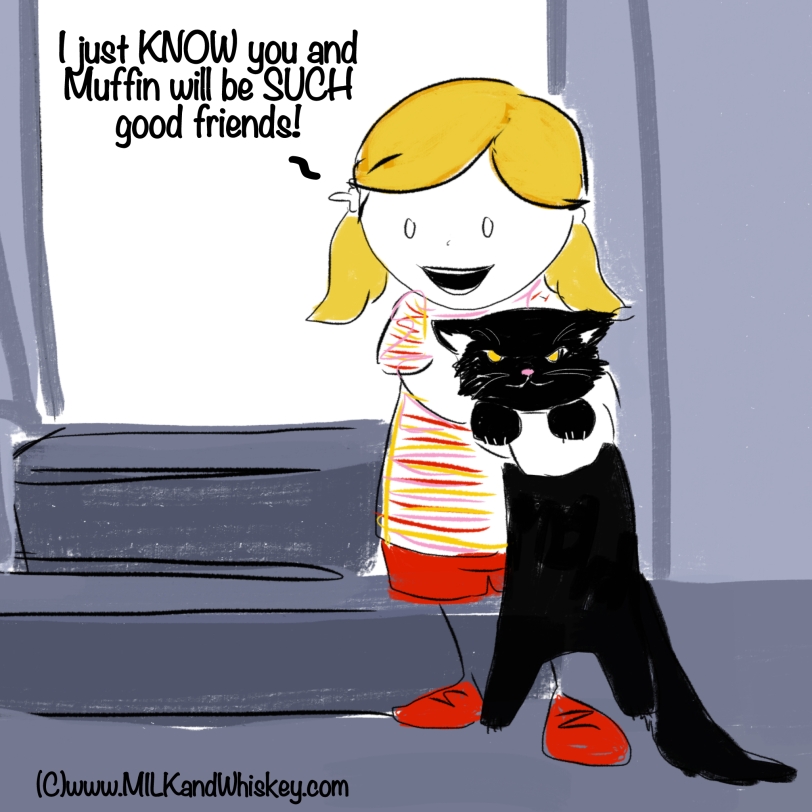 I meant well. I really did.

RULE 2: “Don’t mess with the vacuum lines.” You know how, right after you vacuum, the carpet has those perfectly parallel lines of grooming? No? Yeah, I don’t have OCD either. So Jimmy would vacuum, because he was the only one who could do it RIGHT, goddammit, and we’d come home from a weekend at dad’s to a house with perfectly parallel vacuum lines. I’d let the cat in, first thing, and then I’d lug my overnight bag the long way around, hugging the wall (but not touching it – no dirty handprints on the wall!), past the piranha aquarium (not a red flag at all) to the stairs. Then it was a careful trek up, only touching the very edges of the stairs, to the relative filth and safety of our room. This would go on for DAYS. Basically, no one ever actually walked on the carpet unless in was Jimmy, and he was pushing a vacuum.

God help Muffin if she ever poops on the rug…

RULE 3: “Children should be seen and not heard. Or seen. Not heard or seen. Children should just be. But not here. Isn’t it their father’s night yet?”

At some point, Jimmy decided than Whiskey and I would be much happier at one of a few very expensive and elite boarding schools in such exotic locations as “any-f*ing-where-but-here.” This was an idea our step-mother was actually onboard with, though I can’t remember if she was jumping on that bandwagon or if she broached the idea on her own a few years later. To my mother’s credit, this was a deal-breaker. You could tell her what to wear, who to call, and how to cook pasta, but you could not educate her children…I mean get rid of – you couldn’t get rid of her children.

Jimmy had a lot more rules than that, but we don’t have to worry about them anymore. We walked out of that Lifetime movie of the week as quickly as we’d been swept into it. Except we snuck out in the middle of the afternoon while Jimmy was at work, and my dad was waiting outside in case somebody came home early and needed to be punched in the throat.

We did learn a few important lessons from our time with Jimmy though. One big one was “don’t leave your clip-on lamp too close to your pillow or that shit WILL catch on fire.”

And that’s the important thing, when you think about it.

(Heh Heh, I almost burned it to the ground… next time ~ Whiskey)