That Friday afternoon, Dad picked up MILK and Whiskey from daycare for a drive into the mountains and some quality divorced dad time in Boulder Creek. He stocked up for the weekend with a package of cherry Lifesavers, beer, and a bag of beef jerky (AKA “mountain bananas”) on the drive home. I’m sure the Lifesavers seemed like a great idea at the time, a little pack of bribes for the kids. My sister screamed along to Warren Zevon’s brilliance on the drive into the mountains, but my brain was locked in candy acquisition mode. They would be mine…oh yes, they would be mine.

Dad lit a fire in the wood stove, served up something resembling dinner, and then glanced at the antique clock on the mantle. 7pm. Time to begin the timeless war of attrition known universally to parents as “trying to get the little bastards to sleep so I can get an hour of me time before they wake up and need attention again.”

Dad gave us a Lifesaver apiece to slack our relentless pleading, and then said “no more” despite our renewed desperation for candy. Weirdly, it seemed our father didn’t want us to be all jacked up on sugar and not sleeping. I began to suspect he’d actually purchased the candy for himself, and wasn’t planning to share AT ALL. He put the pack on the mantle behind the clock, where he was sure we couldn’t reach it, and then he sent us off to bed. The taste of cherry goodness did not brush off our memories like it did our teeth.

I bet to this day he wishes he just let us kill the pack.

Dad’s big mistake was twofold: he hid the candy poorly, and he did it while we were in the room. It was like he was daring us to try for it. I mean, I was a seven year old boy. No guided missile system can lock onto a target as accurately as a child seeing candy put just out of reach. All night, I lay in bed plotting, waiting for the boring sounds of adult TV to end. At some point, I must have fallen asleep, but I dreamt about rivers of red dye #5. 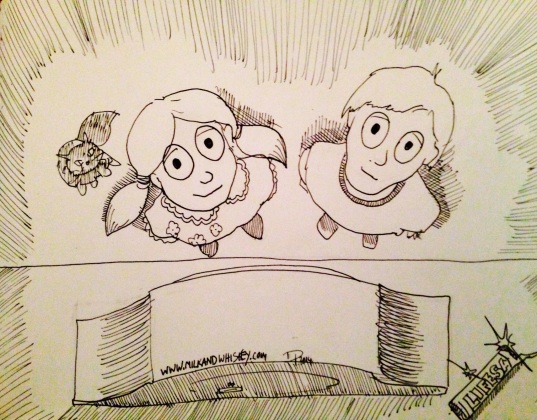 Seven am Saturday Morning, we woke up for cartoons like someone had set an alarm. This was way pre-DVR, and I’d sooner be buried with a live skunk than miss a single episode of Dungeons and Dragons. MILK and I crept into the living room and I put on the TV.  We knew that dad would prefer to sleep in past seven in the morning so my regular job was to turn on cartoons, serve up a couple bowls of Trix, and then keep it down until he got up. But as soon as I’d rubbed the sleep from my eyes, I spotted that shiny red wrapper peeking out at me, begging me to rescue it. At the first commercial break, I suggested to MILK that we should sneak a couple of candies from behind the clock. At the age of seven I thought a roll of Lifesavers was pretty much infinite (until the cruel truth revealed itself and you were looking at one candy left stuffed in its wax and foil wrapper) so there was NO WAY dad would ever find out. MILK confirmed that she indeed liked candy, and would spot me and play lookout.

We built an elaborate ladder consisting of an ottoman, a folding chair, and a box to get me up to the height required to reach the candy. Not the most stable way of doing it, but when your engineering team has a combined age of 10 it’s about what you’d expect. I climbed onto the contraption with MILK helping to stabilize me. As I reached for the prize, everything went horribly wrong. Coming to grips with my new friend, gravity, I grabbed the nearest object, the antique clock. The second I hit the ground I knew we were in trouble. By some stroke of luck the clock landed on a pillow and didn’t shatter. As a bonus we got the candy which we immediately ate, because once you’re in that deep, what the hell.

Dad heard the double thud in the living room, followed by silence and shot out of his room expecting blood, the slightly panicked “oh great, what the hell happened now,” look on his face that every father masters. I had set the clock on the coffee table like nothing had happened. To me, the clock appeared to be perfect. And to a kid, all surfaces are essentially the same; A coffee table is no different from a mantle. We were in the clear.

Or not. In fact, the damn clock had stopped, marking our crime’s exact time of commission, like an unnecessary clue in a Sherlock Holmes novel.

As dad’s gaze panned between the two of us and the stopped clock, I did what big brothers the world over would agree was the only logical course of action. I hucked MILK under the bus. While she was deep into her patented “doe-eye defense,” her lips stained Lifesaver red, I took a step back and pointed at her. She was too young to punish, and everyone knew she was a climber.

That damned clock became a bit of an albatross for me, dad never got around to fixing it, but it was a very nice clock so it was always put on display somewhere. Years later I would have to hear grownups say things like, “hey, swell clock you got there… how come it’s not moving?” “man that’s a beaut of a clock, but it ain’t seven, har har,” or “Oh shit is it seven already? No it can’t be…” and the dagger in my heart would turn just a little bit more. Dad would glance at me and say, “oh, the kids broke it, and I haven’t had time to fix it.” He said this for ten years. I wanted to scream, “It was me! I broke the clock because of my lust for candy! I confess, take me to the gallows or get the damned thing fixed already.” Up through high school, it sat proudly displayed (albeit higher up on a shelf), mocking me for my greed. “You, you’re the one who broke me, for a ten-cent roll of candy,” the clock would silently chide. “And you framed a four year old girl.”

The clock guilt haunted me for years.

MILK and I both agree the whole incident was entirely dad’s fault, we were powerless in the face of such temptation at a young age. Our father would probably disagree, and the longer I’m a father the faster I’m coming over to his side. I had to write this story before I, too, become completely obsessed with the fridge door, the thermostat, and gas mileage.