When I was very young, we’re talking pre-M.I.L.K., we lived in a little hick town in the Santa Cruz mountains. Like every other young couple who moves to the sticks, my parents got some chickens to round out the farming ex-city folk look. Hipsters, you did not discover this. Anyway most of the chickens were run-of-the-mill egg-laying cluck and shit machines. Our family enjoyed the free eggs and garden bug control.

But amidst this poultry paradise, there lived a mad queen: a tyrant who ruled with an iron claw and was hell-bent on yard domination. She slept sitting on top on another chicken, like it was a nest. Anybody else ever have an ambitious chicken?

The Mad Queen’s name was Beauregard and for the most part she watched over the yard and ate bugs. She had, however, little tolerance for the inconvenient humans who fed and interacted with her. She knew she had no chance in a stand-up fight, but this fowl had studied the masters.

Rommel, Hannibal, Patton, Sun Tzu, and the 300 Spartans, she read the damn books and was versed in Guerrilla tactics. (Actually she probably had just watched Animal Farm through the window of the house, I’m not giving that feathered jerk the credit of literacy. She could barely sound out words, let alone comprehend West Point text books.)The chicken sowed fear for months, randomly attacking the humans and forcing them to run for their lives. It turned out, this was only phase one.

Beauregard had devised a plan. She waited until the two weakest humans were alone. She would take the house that day. And when the large male returned…she would have the advantage.

The Queen of Battle

The chicken’s moment came when Mom left lil’ Whiskey sleeping in his crib and ran down stairs to start a load of wash. Divide and conquer. A one to one ratio of human to chicken was exactly what Queen Beauregard had been waiting for. As soon as Mom went into the laundry room, she sprung her trap.

When mom tried to open the laundry room door, back into the house, she was met by 8 pounds of psychotic chicken. Feathers flying feet and beak raging, she lunged at the door repeatedly. Initially startled, mom rose to the occasion. That chicken may have been fierce, but she was between a mother and her favorite child (to this day).

That could have been the end for us, but Beauregard hadn’t counted on the laundry basket. Like Zorro and an inept Spaniard, they dueled up the stairs. The chicken, with her claws and beak and retarded sense of her own ability, and the mother, using a plastic basket as both sword and shield, a blizzard of clean laundry flying around them. After a fight to end them all, mom triumphed. She flipped the basket, dumped the last of the clean clothes and slammed it down. “Beauregard the Brave” was vanquished, trapped under a Kmart laundry basket. Her indignation was on par with Napoleon’s when he was banished. She frantically scratched out escape and revenge plans in the bare earth. Mom kicked the basket once for good measure and went to find something heavy to put on it.

She’s still out there, according to chicken legend, a feathered Valkyrie. They speak of Mad Queen Beauregard in hushed clucks. Word on the street is, they’re raising armies out there, in the backyard hutches and fields and dirt alleyways of the world. They’ve given up on those white factory chickens, perhaps they will free them after the war.  They know that the real chickens, the Rhode Island Reds and the Plymouth Rocks are the soldiers. The poultry bide their time. Their battle cry will be “Beauregard”

It’s interesting that both of our parent’s deny knowledge of Beauregard’s final or current whereabouts. They swear we didn’t eat her. Maybe the chicken legends are right. She could still be out there, mad-as-a-hatter and growing craftier with age.

Then again, there’s always the possibility that Mamie got her when no one was looking; she was from the old country and didn’t take crap from birds.

I like to think of her in a tomb waiting… 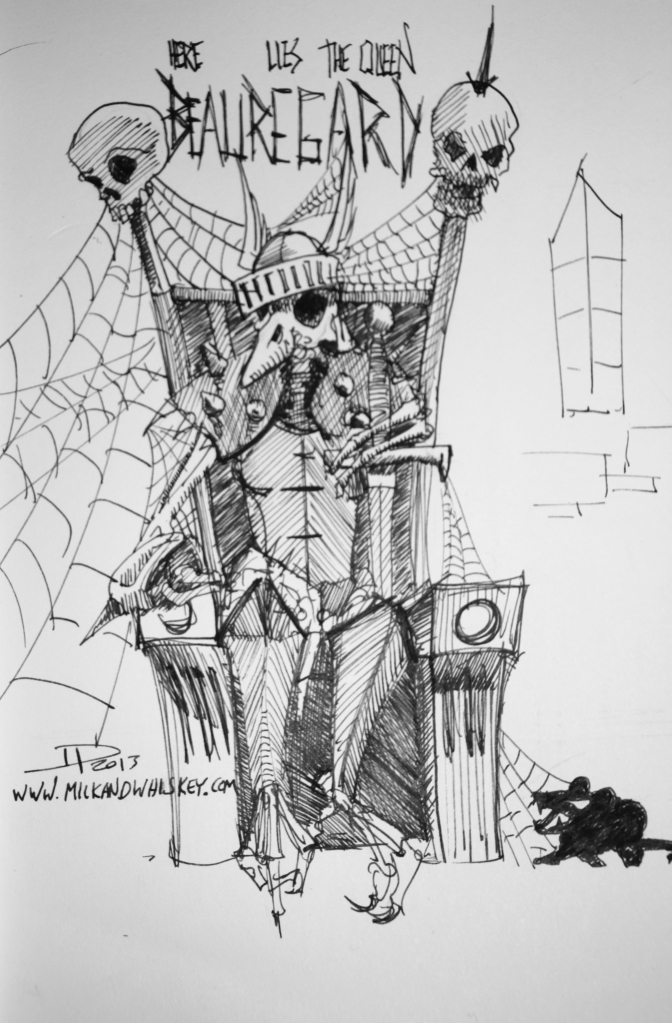 Somewhere in a forgotten tomb she rests.

7 thoughts on “Mom Flips the Bird.”