The Big Bikini Barista Bust of 2013

So it turns out that a few of the so-called bikini baristas have been…brace yourselves…engaging in lewd behavior. The illegal (in this state) kind. More lewd, I guess, than serving food and beverages in your skivvies.

Which, technically, I guess I do. But almost always at home. And usually also wearing a pretty disgusting bathrobe…so, not really the same thing.

And, of course, I almost never flash anyone since I weaned the last kid. But these girls are ex-strippers and escorts, so there were all kinds of sexy shenanigans going on over steamed milk and stale bagels. And, according to sources, my city is the BEST city to work in as a bikini barista because you can be extra “naughty.” Everett wins at something, at least.

So the cops had to get involved.

Except, as it turns out, the cops were already involved! Because some cops are also men and some men just cannot resist boobs. Sherriff’s Sgt. Darrell Something had put the ladies of Java Juggs (fer real, y’all) under his special protection in return for “repeatedly hugging and kissing the women.”

Yup. Hugging AND kissing. The scoundrel.

And you know how he got caught? Because he NEVER BOUGHT COFFEE. Seriously. One of the prostitute baristas actually complained to a detective that a “Snohomish County Sheriff’s deputy was frequenting the stands and touching the baristas without paying for coffee.” Priorities, much?

So they shut down the Java Juggs in Everett and exactly no one was surprised. And now Hillbilly Hotties (fer REAL, y’all) is in *ahem* pretty hot water. Of course, I hear some scary things about the talent there. 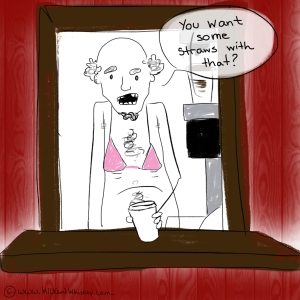 The original article in the Everett Herald (from the Sgt’s bust, way back in June) reads like a treatment for a Lifetime Original movie: Dirty cops, underage strippers, and the f’ing MOB. It’s exciting stuff. And they showed remarkable restraint in not making the “bust” pun. I have no such self control.