Cry Havoc and let Slip the Fluffy Puppies of War

When Whiskey, Uncle Smokey, and I first joined forces (as the sibling team that brought you the Lucky Charms incident of 1986), we lived in an awesome little hick town in the Santa Cruz mountains.

At 5 & 7 years old, respectively, one of our few chores was to take the family dog for a walk. At night. In the woods. Because our parents had grown weary of us having all of our limbs, apparently.

My brothers and I were about ready to crap our pants the first time dad handed off the leash and told us to hit the road. The thing about hick towns in the woods, is that everybody has a big ass dog. They just come with the house, I suspect. Here are your keys, here is your big ass dog. Our neighbors had a pair of timber wolves and a very rickety fence. We had a Samoyed. The dogs just got bigger and meaner the farther you walked down the street. None of us moved.

The boys gave me the look that meant it was up to me to broach the subject of killer dogs. The boys would never admit fear in front of dad, but I was the girl. I was special. I could save us all, they figured.

I went to dad and put on my best, lispy five year old voice. “Dogs,” I explained. “Big dogs. Huge. And loud.” I made my lower lip quiver. “I think the boys should go without me,” I said.

He laughed. “Demon dogs. Yeah, they’ll get you every time. Just throw ’em a milkbone and try to be back before the werewolves come out – big dogs are nothing compare to werewolves.” He patted me on the head. “It’s not a full moon yet, so you should be fine.”

Did I mention that my parents are hilarious?

We took his advice to heart and stopped in the kitchen to grab a Milkbone. L’il Whiskey decided, given the size of the dogs, we’d need more than one. He grabbed the box. I thought, just in case of werewolves, we might need something more substantial. We’d had ribs for dinner, so I stuffed my pockets full of leftovers. Rubens nodded his approval. We gave him a bone right off the bat. Better keep the dog we had on our side. We made peace with our Gods, then, and headed out.

It was dusk. Surrounded by towering redwoods, dusk looks an awful lot like night. Either way, you can’t see the sun. Moon wasn’t high enough yet for me to confirm just how “not yet full” it was, either. Rubens padded up the drive and swung a right, trailing a huddled mass of kiddo behind him. He knew the route, so he took point. We walked in a defensive triangle, eyes and ears on high alert. The neighbor dogs were waiting for us. They stared us down, as usual, standing at the edge of their property, growling deep in their chests. Maybe they were the werewolves.

Whiskey threw ’em a bone quick and we hurried down the road. There wasn’t a single bark and we were clear of the yard in no time. We shared a triumphant smile. Laughing to break the nervous tension. This wouldn’t be so bad.

Same thing at the next yard. And the next. Rottweilers, Huskies, Shepherds. They all let us pass, gnawing their prizes. I started to skip, I was so relieved. Not tonight, I said to death, shaking my tiny fists…which may or may not have looked a lot like jazz hands.

Then I looked back. 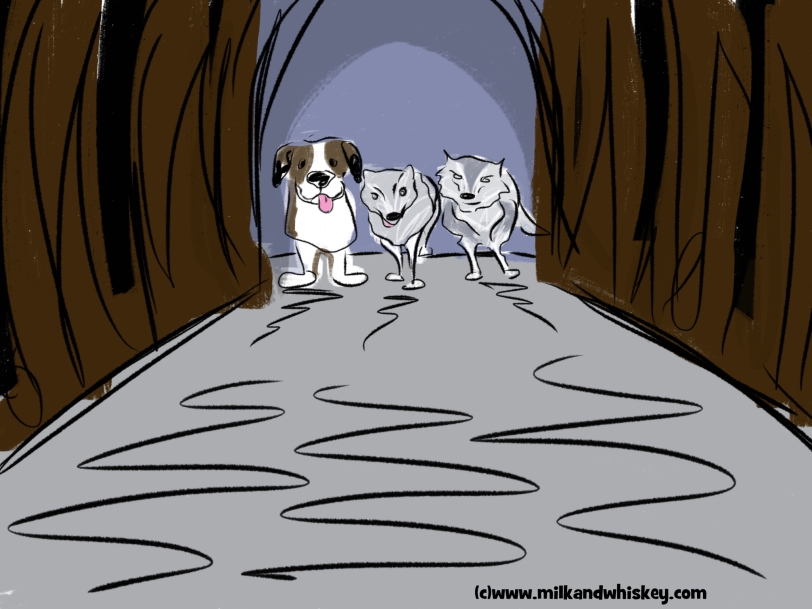 The wolves had broken free of their yard. Wolves will do that, given the right incentive. They had a wound up looking Cujo with ’em too. Big and hungry for the flesh of tiny humans. They were gaining on us fast enough, at the casual pace of dogs who know they can outrun their prey without breaking a sweat.

I looked at my brothers. We all knew I was the slowest. We also knew how it would look if they came home without me. Whiskey dropped Rubens’ leash and grabbed my hand. RUN, he screamed, as if volume would make my legs any longer. After half a block, he left me for dead. It was every man for himself and I smelled like pork.

Milkbones hit the ground around me as Whiskey chucked ’em over his shoulder. I pulled bbq ribs out of my pockets and dropped them on the pavement as I ran. Rubens trailed behind, cleaning up after me.

Smokey was first to the door with Whiskey hot on his heels. They waited on the porch, sweating, until they saw me come down the drive. They were willing to leave me to the dogs, but they weren’t going to admit that fact until they had to…and until they had their story straight.

Then we all sat on the porch, panting, until Rubens sauntered back home, looking studly. There was some concern that dad liked the dog better than he liked any of us, so we weren’t going in without him.

As the night black that started in the trees rose up to swallow the sky, It became clear to all of us that the Gods had been on our side that night. We’d survived the unsurvivable. This night would go down in legend and song.