Lesser Known Horrors of the World Before MP3

I don’t know if it was just me, or if this was a global phenomenon, but through my life I’ve been cursed with evil car stereos. I never know when the damn things are going to turn on me and eat a tape or a CD and force me to listen to it over and over and over and over and over, or listen to nothing but the wind, or the wind coming from my traveling companions. Kids these days will never know this special kind of hell because their music just flies magically out of hard drives.

Here is a list of all the times this happened to me, and the cars (partially) responsible.

1. The Cars Heartbeat City. Our mom’s Honda Prelude ate this cassette back in 1986. She sold the car in 1997. The tape was included to sweeten the deal. You can drop any track from this album anywhere in the song and any of us can immediately jump in without missing a beat.

2. Less Than Jake, Pezcore. The 1979 Toyota Celica hatchback that I drove in the late 90’s to a series of community colleges decided to share this gem constantly. To this day, I fucking hate SKA revivals.

3. Green Jello, Cereal Killer. In real college, UCSC, I drove a 1986 Isuzu Trooper 2. I loved that truck, but it forced me to listen to “Three Little Pigs” for a month straight. Then, one day, I was driving to the beach and it suddenly ejected. I threw the tape out the window.

4. Into Thin Air book on CD, the last disc in the set. 1994 Saturn SL2. I was driving across the country. Literally, from San Jose California to New York City. Somewhere in Utah the CD player decided that for the next 2000 miles I would listen to Jon Krakauer describe the tragic deaths of Everest climbers over and over. It was an exquisite form of mental torture. It finally spit the thing out a month later and, after years of therapy and pharmaceuticals, I have finally stopped obsessing about slow death by hypothermia and oxygen deprivation at the top of the world. 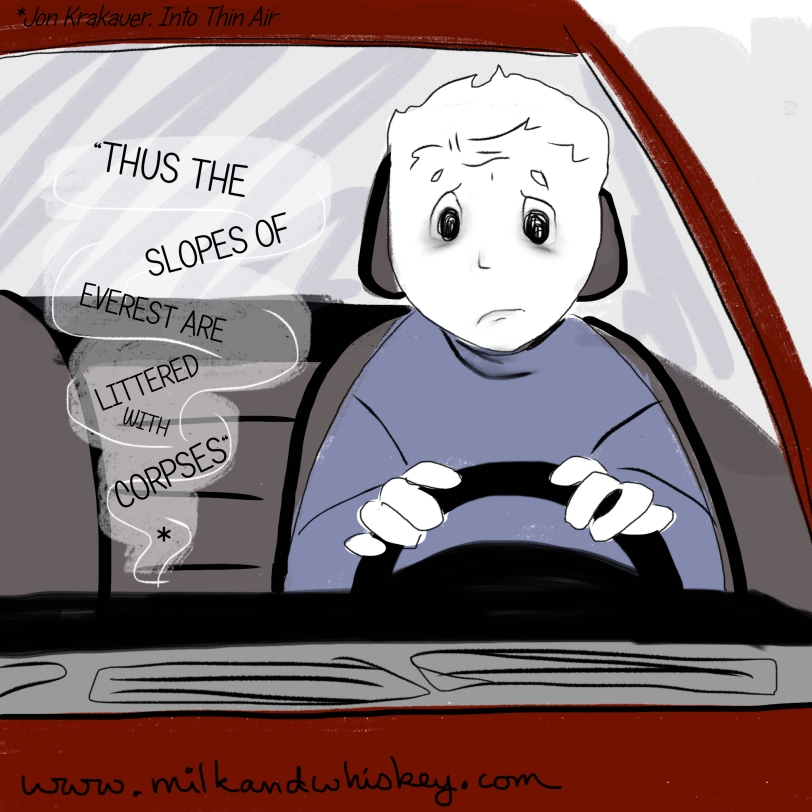 5. Guns N’ Roses, Appetite for Destruction. The final chapter in the Saturn’s life was accompanied by this epic album. I ditched the car and CD in Madison Wisconsin during our move to Los Angeles.  If it has to happen, that is at least a great album. But I don’t think I voluntarily selected any Guns N’ Roses track for two years.

Holy shit – I had no idea that Cars tape was stuck! I thought mom just really liked it. And now I have “Magic” stuck in my head, so thanks for that.

I’d like to add number a number 6: The Strokes, Is This It. The 1986 Toyota Corolla I bought in South Bend Indiana in 2002 for $900. I bought a shiny new stereo for it and refused to be suckered into the replacement insurance from Best Buy. Within a week, my car battery died, the stereo decided it hated me, and I listened to nothing but the Strokes until the day I gave “Brakeless Wonder” away in 2006. Could’ve been worse, though. Could’ve been Into Thin Air.

5 thoughts on “Lesser Known Horrors of the World Before MP3”