Explaining Marriage Equality to a Child

Recently, my state got their shit together and voted in favor of marriage equality. This was pretty damned exciting, I have to say, and briefly renewed my faith in humanity. During the weeks leading up to the vote, we were subject to a lot of ads on the radio assuring us that this would end in disaster. One of the more bizarre points, to me, was that our kids would find out about this. “They” would – gasp – teach it in schools. I don’t even know how that’s supposed to work. I don’t remember learning about marriage in school. Everything I knew about marriage I should have learned from my grandparents, the only people I knew who appeared to be doing it right. But instead, because this is how those things work, I learned about marriage from my parents.

Things I “knew” about marriage as a child:

I can’t think of a second thing. The first thing took up too much of my attention. SO when people started panicking about teaching their kids about this whole “gay marriage” thing, I rolled my eyes. Then, because I’m a helpful person, I decided it was a conversation I should have with my kid, so I could give pointers to all the frightened people. So we did. She even brought it up, kinda. I laid it out…kinda. And then it was over. We both survived. She doesn’t appear to be emotionally scarred, even. It actually happened in a car, like most of our conversations, but I drew it on a hill at sunset because that’s where deep conversations SHOULD take place. It went a little something like this: 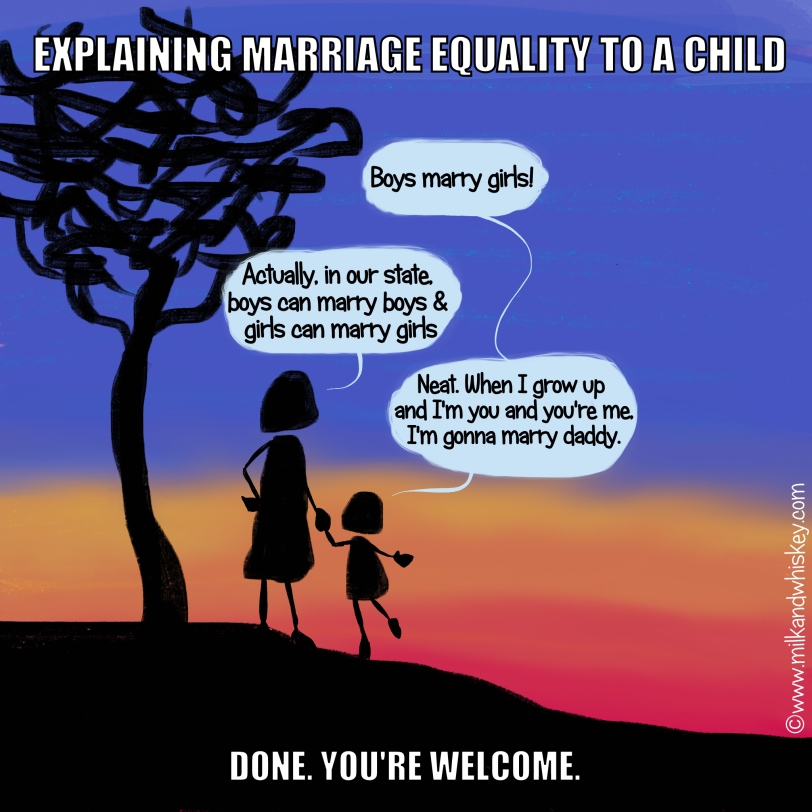 Her mind was not exactly blown. I think people might be putting a little too much faith in kids giving a crap about anything that doesn’t immediately affect them. You know what’s really hard? Try explaining to a kid the concept of infinity. Or why daddy’s always fighting with the voice on the iPad. Or why that man ahead of you in line is “SO fat”.

That’s what parenting is all about, people. Answering the tough questions.

5 thoughts on “Explaining Marriage Equality to a Child”