I’m a fan of “classic rock.” I also enjoy pretty much every form of music short of bubblegum, but I’m working on it. Classic rock radio stations, however, perplex me. How does it work?  At what point does a band get to be played? And the big question is… how bored are the DJ types?  And what’s with the trend of them being named after animals and natural features. I’ve driven from San Francisco to New York City and along the way I listened to: The Eagle, The River, The Mountain, and a dozen others. Anyway here is an imaginary dialogue at a meeting at “The Ocelot” so keep your adorable tufted ears tuned… 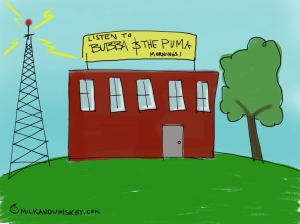 You’re tuned to “The Ocelot”

“What the hell were you thinking playing Alice in Chains?” The station manager barks as a Willy Nelson look alike steps into his office.

“That shit is still for the kids! Dammit, I think you may have freaked out a Beatles fan.” He takes a look out the window.  “I don’t know… it’s pretty cutting edge.”

“Layne’s dead, Mike Starr is dead…doesn’t that count for something?” The DJ pleads.

“C’mon, Uncle Roy, you think being dead is all it takes to get air time? We don’t even play the Sex Pistols, for Chrissakes. We have to have a board meeting with the corporate suits for this shit! You know this.” The manager stares out the window, flicking a pen against his teeth.

“Whatever, you really are “the man” you know.” Roy sulks back to an endless torrent of the usual.