We took our family to the beach the other day, which is pretty much our go-to for weekend fun. As a special treat, we even went out onto the Pacific Ocean Pier where they have this amusement park that’s a pale shadow of the really awesome looking amusement parks they used to have…back before safety regulations. You know, the ones that always seem to burn down for some reason.  Anyway we get done with the kiddie rides and walk down onto the sand for some photo ops with the kids.

Now there is nothing Dr. Wife loves more than taking pictures on the beach with the kids, and this day was no exception.  So we go down by the water and are capturing moments that a Sears family photographer would die for when I  psychologically scar my child.

The pier has a small roller coaster on it that, given the size constraints, is doing its best as a family friendly little thrill ride. While we are posing down on the sand below the pier, the generator that powers it fires up and startles my three year old son.

The smart thing, and the Mr. Rogers thing, to do at this point would be to comfort the child and explain exactly what had happened and save him from years of irrational fear.

Not on my watch, for this kinda of thing is family tradition!

“Oh,” I said, “that’s just the monster that lives under the pier waking up.” At that moment I remembered that kids buy what you’re selling most of the time.

“We should leave,” he said nervously. 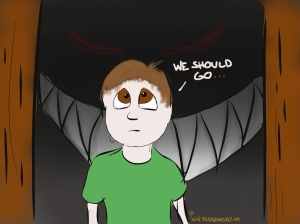 Weird thing is I think this same monster lived in my garage when the lights were out.

“Haha,” I laughed, “it’s fine. Here, stand next to your brother and say cheese!”

He looked at me like he just realized we were standing on an ancient Indian burial ground and that’s why everyone else was a zombie. I worked on a ghost hunting show for two seasons and there were few times where I witnessed fear of the unknown to this degree.

Mission accomplished.  Of course I probably should not have bought four unlimited ride passes to use on a future visit.