Thanks to Almost Iowa one of our favorite blogs for the writing challenge.

Dr Brains came over the other day with his brood in tow. Two little girls crashed into my apartment in a tornado of pink, purple and sparkly stuff. They threw off their shoes and backpacks and grabbed my sons and ran off to the bedrooms to play “get out all the toys and make a huge mess”. It’s practically a ritual around here.

“What’s in The Eagle?” Brains asked. In the distance the crashing sound of a giant bin of Lego being dumped out, then giggles.

“The Don Henley joke was funny the first hundred times. Got any coke?” Dr. Brains headed to my fridge.

“I think it’s one of those jokes that if I stick with it will get funny again.” I sighed, resisting the easy cocaine jokes popping into my head. 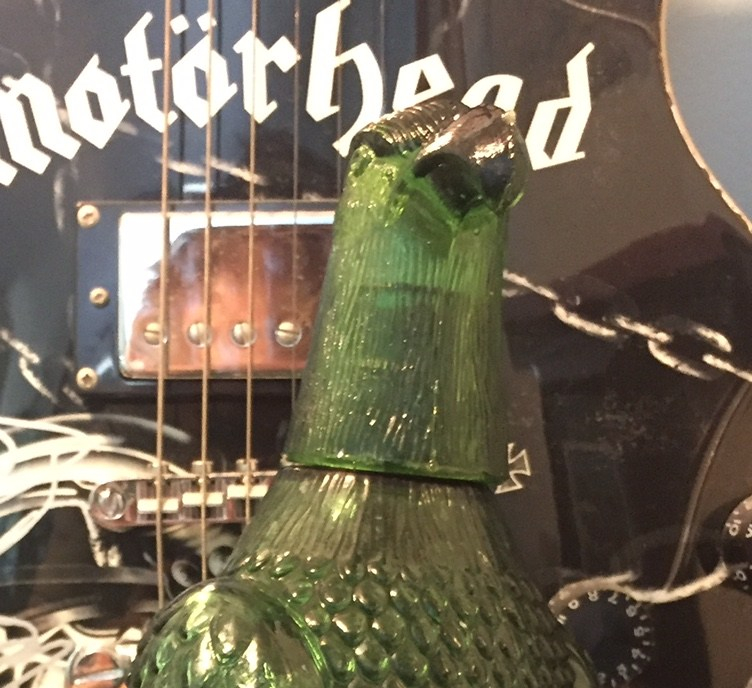 “Thanks for not having tequila or scotch in there,” Brains said. Dr. Brains has a very narrow palate in his drinking.

Eagle came into my life as one of my war trophies from my crazy job. I was doing a pilot for a Discovery Channel show at a weird store in San Francisco owned by a very weird couple. The store kind of looked like a garage sale at the Addams Family mansion.

I spent three days in that shop, but I noticed Eagle the first day and knew it had to be mine. I promptly hid it so no one else would notice it until the time came to leave and I could make a deal. It is crafted from green glass and I have no idea how old it is or who made it or where; it looks like Roger Corman remade The Maltese Falcon and this was the prop. It holds perfectly one fifth of liquid.

I scored eagle along with some taxidermy work in exchange for a program from Bettie Page’s funeral. Like I said, weird people…of course what does it say about me?  The funeral program was done by the pin-up artist Olivia, and I was one of maybe twelve people at her funeral so I grabbed a couple. Milk has the remaining one. Anyway both parties felt they got a good deal.

Eagle serves a very important purpose, it holds booze but is not an actual bottle of liquor. This way I get fewer eye rolls from the women in my house (especially the Mormon one) when I’m over at my 1970’s Jack Tripper wet bar fixing up a “Lemmy.” Eagle is reserved for good, ok medium good or better fire water. No cheap stuff shall contaminate Eagle.

I think my real attachment to Eagle is that it represents all the tacky crap that was around when I was a kid in the seventies. It shares the same aesthetic as the green glass ashtray my grandmother had on the coffee table. I used to drive my toy cars around in its Salvadore Dali curves (After I emptied my grandfather’s Pall Mall butts of course). It’s my uncle’s gold Pinto, or my grandmother’s gold Plymouth Duster, it’s an avocado fridge, red Kool-Aid, riding in the back of pickups, and holding your dad’s beer while he worked the stick shift.

“Why are you staring off into the distance again?” Dr. Brains asked as he headed for Eagle with an empty glass and a can of coke.

6 thoughts on “My Eagle”