My brother, whom you now know as Whiskey, has been by and large the primary instigator of shenanigans throughout our lives. It was not MY idea to recreate a Lucky Charms commercial and end up in the hospital. It was not MY idea to drop in on an olympic qualifying slalom competition after a single day of ski lessons. Being a little sister, I generally followed behind at a safe distance as Whiskey stress-tested life so I could see what was fun (leaping onto pillows from mom’s loft-bedroom window) and what was destined for pain and increasing long recovery times (falling twenty feet out of a tree).

These things were not my ideas.

Being an inclusive sort, however, Whiskey was always more than happy to drag along anyone – friend or sibling – willing to participate in the shenanigan du jour. A lot of older sibs go to great lengths to ditch the younger, but not Whiskey.

(*tangent* I asked another friend, who’s quite close to his sister, what he thought the key was to a strong sibling bond. His answer: dysfunctional parents. It’s a good answer. When life is unstable and ever changing, you count on your siblings because you don’t have another choice. Friends come and go along with apartments, houses, would-be step-parents, schools, boyfriends, girlfriends…But at the end of each day there, without fail, your siblings. So we always come back to each other.) 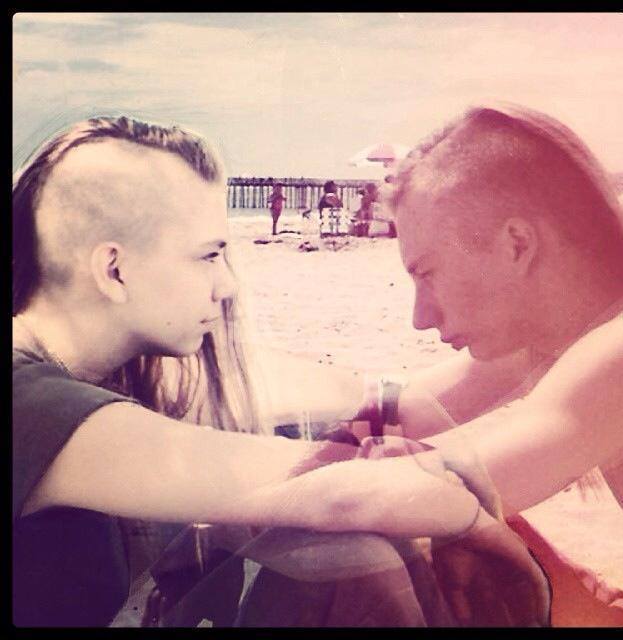 MILK and Whiskey, the teenage years

So I started noodling around with this idea of starting a blog filled with stories of then and now, peppered with art. I figured it would be a good place to practice craft and consistency and to collect all of these ideas in one place. I even had the perfect name – something that summed up the good and the bad of life and how even the bad stuff could be the best part. Because my brother’s always tried to include me as a partner in whatever the hell crazy idea he has from one moment to the next (“Let’s steal wood from that construction site and build a house…Hey look a box of Skil Saw blades, catch!” “Let’s steal carnations from that greenhouse and sell them door to door!” “Let’s write a screenplay!”) I gave him a call.

“I’m thinking about starting a blog with stories about our wacky childhood and raising kids now and all of that crap,” I said. “You want in?”

“Yeah, absolutely. What should we call it?”

“I was thinking Milk & Whiskey, it’s sort of like-”

“Haha, NO, it’s more about the dichotomy of-”

“Goddammit it, we are not an a.m. disc jockey team. I have a master’s degree!”

“It’s from a football school, and I’m already writing the first story. You want me to buy the domain name, MILK?”

“I hate you. Your school is a joke in Pulp Fiction.”

And that’s how MiLK & Whiskey was born. In case you were wondering.

*I wanted to be Whiskey.