I feel like most of parenting has come as a complete surprise to me, despite the fact that I read all of the books. Potty training, though, that nightmare caught me completely off guard. I mean, yeah, I obviously knew at some point the kid would need to stop crapping her pants. That’s kinda a given, mentioned blandly in What to Expect with an age range and a few blithe tips like “let your child watch you use the potty” as if keeping your kid out of the bathroom was ever a realistic option. Even the potty training specific manuals I read to guide me through this inevitably traumatizing process never mentioned these fine gems.

1. The Pressure is Insane. Potty training is the first milestone you are legitimately responsible for as a parent. Oh, sure, we take a lot of pride in the kid who’s walking at three months or doing witty stand-up before that one year mark, when all her little friends are still struggling with prop-comedy like a bunch of goddamn amateurs. But smiling, crawling, walking, talking, and Simpsons appreciation are all just things that happen when they’re gonna happen. (Some say that’s true of potty training as well. We call those people “grandparents.”) 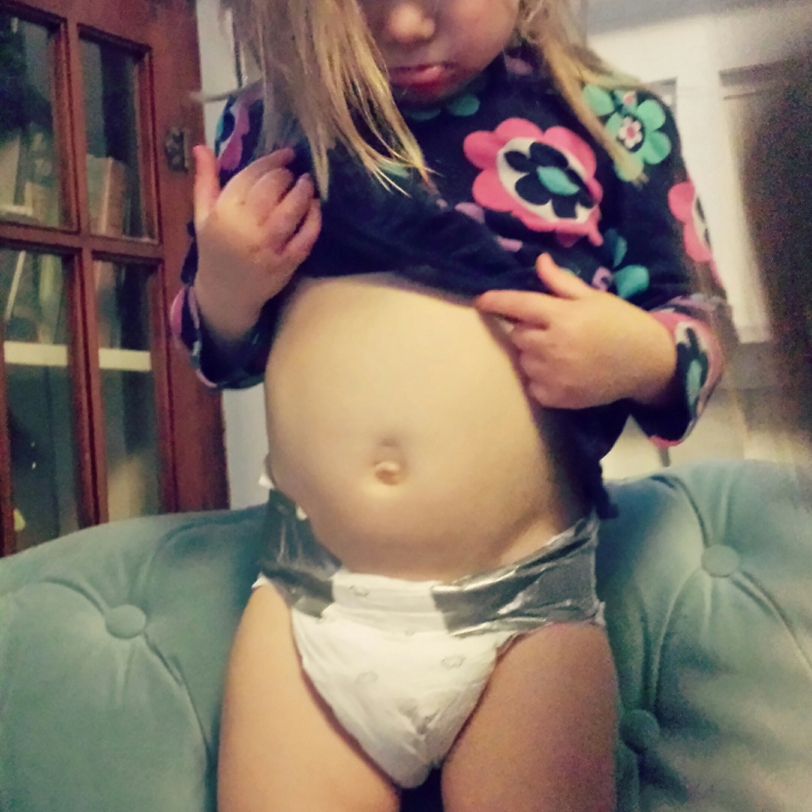 Potty training, though, that’s all you. Well, it’s like 80% you. And when your friend’s kid is happily using the port-a-potty at the park at 18 months and your two year old could be sitting in her own feces for an hour without showing the least sign of discomfort – well you might not feel like a complete parental failure, but it’s clear you’re not exactly killing it, either. “Look for signs your child is about to poop” is super helpful advice if your kid isn’t perfectly capable of taking a crap at a dead run and shaking it out his pant leg without missing a beat.

2. The Pressure is bullshit. Turns out the grandparents were right. There are kids who care about things like being damp or making mommy proud, and there are kids who just don’t and all the wet panties and crapped in pull-ups in the world are not going to make a lick of difference. By all means, keep banging your head against that wall, though. One of you will definitely end up in therapy.

3. Poop is disgusting. Infant poop is a joke and baby poop is gross, but toddler poop is freaking horrifying. It stinks like mad and it comes in a wide range of awful, nauseating textures. When you decide to ditch the diaper, you take an already unpleasant little package of vomitous garbage and unleash it onto your whole world. The worst part – kids don’t think poop is gross. Kids think poop is HILARIOUS.

4. Self-wiping is apparently impossible: In addition to trying to teach a toddler to forgo the conveinence of diapers and use the potty, you also have to convince them to wipe. And to wipe thoroughly. This is more difficult than it sounds as children apparently have Tyrannosaurus arms and can only flail around at their hind quarters while spinning like a dog trying to catch its tail. Just when you hit that amazing time where your child gets up and goes to the bathroom by themselves and you hear a flush, and you’re about to high five your spouse, the kid walks out into the living room looking horrified and announces, “There is poop EVERYWHERE.” Well time to bust out the paper towels, or just burn the house to the ground and move.

5. Your entire house is a toilet: That old line about the most dangerous moments being those when the children are being silent? When you’re attempting to potty train and your precious flower is playing ever so nicely and quietly by herself, it’s because she’s dropping a deuce behind your couch. If you’ve never had pets, you might not be familiar with a little product called Nature’s Miracle, for cleaning up those biohazards delicately referred to as pet stains. If you’re contemplating potty training, get thee to a pet store. I only have two kids (and one cat) and I can’t think of any part of my house that hasn’t been christened, from hearth to bed to bathtub. On that note – when you get a waterproof mattress pad for your kid’s bed, get one for yours as well.

I’m elbow deep in potty training and I just ran out of Nature’s Miracle. If you’re like I was as a new mom and you’re feeling that pressure to get your kid into some days-of-the-week panties before their second (or third) birthday, take heed. Not changing another diaper might sound like a dream come true until you’re washing wet crap out of six dollar panties in the toilet at the children’s museum. Your kid drops one in a diaper at the library? No problem. Your kids pees on the carpet at the library? Problem. Or in the ball pit. Or on that new couch you REALLY should have waited another six years to purchase. These things happen. And sometimes, if you’re really lucky, a rat climbs up your toilet and sets you back a full year.

I’m not telling you not to try. Hell, I’m trying right now. Once again, I’m failing to follow the grandparent advice of “just wait until she’s three and save yourself some trauma.” The only difference this time around is that I know what to expect.

And I already have that waterproof mattress cover.

5 thoughts on “Life is Sh*t: 5 Horrible Truths About Potty Training”