Come with me to a magical land called the early eighties “pizza parlor.” Do they even still call them that?

The pizza parlor was always dimly lit, I suspect this was to hide the carpet stains…or it was a courtesy to the roaches. There was always a red-checkered plastic table cloth, thin cheap flatware, and two identical globe shaped shakers, one cheese, and the other red pepper. The centerpiece was a lumpy red glass candle whose purpose was to give kids something to screw with until their parents finally snapped (there were usually a few half burned toothpicks stuck in the wax by the time we left). The walls were adorned with dusty plastic grapes, old Chianti bottles dripping with wax, and faded pictures of Italian stuff.

The grownups would always order a pitcher of yellow domestic beer, or maybe a carafe of shitty red wine and then handout fistfuls of quarters for the little arcade at the back of the parlor. I know I’m getting a little nostalgic here, but I miss the little arcade at the back. If you were fairly young, as you walked back there you just hoped for no teenagers, or at least a low teenager head count. If you were older, you hoped that one “little shit” wasn’t dominating the Street Fighter machine, if so you would have to play Smash TV or risk complete humiliation.

MILK played a very different game. She would pocket her fistful of quarters and bide her time. Oh, sure, she’d drop a quarter or two on last decade’s racing game, but she wasn’t suffering from a debilitating addiction to video games. She knew my disease, though, and exploited it perfectly.

MILK would watch with a smile as the dreaded “Game Over” screen flashed. I would dig in my pockets and come up with lint… Slowly turning around, there would be lil’ MILK.  She would casually jingle the gang of quarters in her pocket.  “Need a game?” She’d ask.

Not this time I’d say to myself, this time I’ll be strong. I still owed her from last Friday. Then I’d glance over at the folks drinking beer and smoking and cackling to each other; turning my head the other direction it would bathe in the glow of a Spy Hunter machine. MILK would stand there just waiting and smiling. Another pusher surveying a junkie holding a stolen stereo. What did she care about quarters and video games – she’d brought a book, she could wait all night. I’d not so casually try the coin returns on all the games, I’d peer under them… I’d cave. 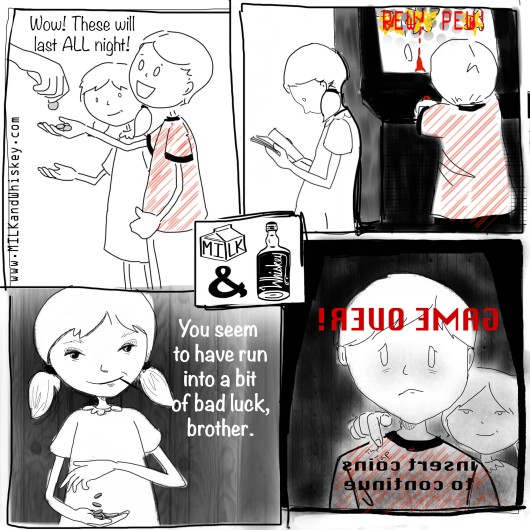 By the time I was blasting aliens again she would own me. I’ve never been good with addiction or self-control, and she exploited me with no mercy.  The chores I promised to do, the dogs I walked, the rat cage I cleaned, watching her eat my dessert, and the TV shows she got to pick. It got pretty ugly; I would be sitting through Chip N Dale’s Rescue Rangers when G.I. Joe was one click away.

Nowadays pizza places are airy, well lit, clean looking, and boring.  The dark little arcade has gone the way of rotary phones and smoking sections. They have “Thai Chicken” as an option… It gives me the “Shakey’s” just thinking about it.