Her Ass Would Make a Terrible Giraffe

Last night I went to an honest to God musical entertainment event. I think the kids are calling them “shows” but it’s been so long I don’t even know anymore.

Seeing the twenty-something girls dressed up to make the boys cry made me a little nostalgic, I have to say. Those adorable twenties, you know, look at ’em go. So vibrant.

At some point, while Preacher’s Wife was killing it, my friend Monica and I went to the bathroom. Because we’re girls, we have to do that in pairs. Those are the rules. What ensued was both enlightening and traumatizing.

The bathroom had one stall. There was a pair of those same twentyish girls in the tiny sink space outside of the stall.

Monica made a comment, which I think was meant to be a compliment, about Girl 1’s dress. This is the kind of polite conversation one expects in a crowded bathroom. Hey, nice dress, someone says. Thanks, I love your shoes, says someone else, want a bump? Etc, etc, and part ways. Not tonight, apparently.

“What, this Ross bargain?” she screamed. “It was, like, three dollars!”

Then she pinned the stall door shut, so we couldn’t go piss, which was all either of us had ever wanted to do. Her friend locked the main door. This is usually when someone gets murdered, but that’s not what happened.

Girl 1 screams, “You gotta see this, though! I’m not gonna let you leave until you see this VERY important thing!” Then she points her ass at us and lifts up her skirt (which, admittedly did not have far to go) to show us that, beneath her sheer black tights, she is not wearing underwear.

“Even with a thong you can see a panty-line in this dress! Isn’t that CRAZY? I can’t wear underwear in this thing!”

And then, possibly because I was a beer and a shot into my evening, I proceeded to argue the importance of panty-lines vs the comfort of a nice pair of boy-shorts with a very young, very drunk girl-woman. My brain was screaming at me to disengage, but my mouth just kept spouting truth. Monica managed to slide around her and breech the stall at some point.

“Oh my God,” I said, finally cutting myself off, “never mind. I’m sure commando is even more comfortable than boy shorts. What am I even saying?” (Besides, the real question had to be; where have you been sitting – because I don’t want to sit there…ever.)

Not to be outdone, her friend responds by pointing HER ass at me and dropping her pants to show off her lacy pink thong. She made some announcement at the same time, but I have no idea what it was. My brain exploded. 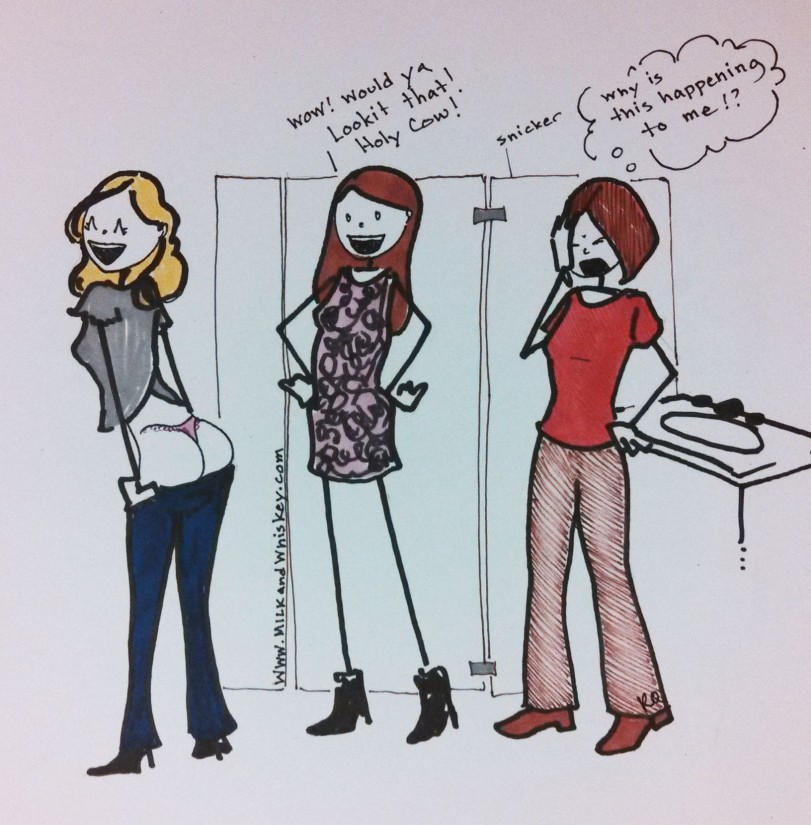 This is not the first time this has happened to me, believe it or not.

Girl1 squealed, “Oh that ASS! I would kill for that ass!” and then she slapped the ass, sending a flesh ripple into the pink lace. And I vomited in my mouth.

“Jesus,” I said, “It’s like two balloons stuffed in a…well, in a pink thong.” I was making no sense. I just wanted to leave. I could hear Monica trying not to laugh. Girl 1 continued to admire Girl 2’s delightful hind-quarters like it was the prize pumpkin at the fair.

“How do you compete with that?” I asked a reemerging Monica, only half rhetorically. “Thank God I have a Master’s degree to fall back on.”

And then we were allowed to leave the “ladies” room of Kroaker’s.

“I think I prefer balloon animals to balloon asses.”

“True that. Her ass would make a terrible giraffe.”

I don’t know what boys talk about in the bathroom, but I’m guessing it’s a very different scene.

8 thoughts on “Her Ass Would Make a Terrible Giraffe”