Here is how the ritual of my first knife played out. It was Christmas Eve, and after opening the rest of my gifts, my dad gave me a small box. He gave it to me with an air of seriousness that one usually reserves for a religious rite.  I opened it carefully; as soon as I saw the Swiss Army logo I knew my time had come. I was a man now. Inside was a gleaming red and chrome Swiss Army Spartan. 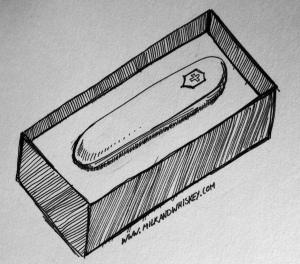 “Now remember, be careful with that, it’s very sharp,” my father said, beaming with pride (and “Jim Beaming” as well). “Don’t cut anything you shouldn’t, especially yourself.”

“I will, father, and I will keep your trap lines running all winter.”  Did I mention our family teaches sarcasm at a young age?

First pocket knives are magical for boys, it’s often the first legitimately dangerous thing you are trusted with by the grownups. You feel like you’re about to grow a full beard any second, once they trust you with a knife. My knife felt like it vibrated with some life force of its own. The knife wanted to be useful, it would make me useful.

I immediately began a desperate search for legitimate uses for my knife. Short of opening the mail around the house though, there is not much call for a 10 year old with a razor sharp pocket knife. It just seemed cruel; I was always at the ready but, for some reason, no one needed a piece of rope cut, or a box opened, or a fish gutted. There was even a pair of screw drivers and a can opener on the thing but every time a screw needed turning or a can opening, someone had the proper tool already out by the time I wandered by.

Having been thwarted by reality, I began whittling.  That seemed like something a rugged fellow like I hoped to become would do. I sharpened three dozen sticks before I sharpened my thumb. Brand new Swiss Army knives are only slightly sharper than a scalpel.

I nearly always had my knife on me and, for that Spring and Summer, I was also rarely without a band aid. The knife would always find a way to bite into my tender flesh. One of its favorite tricks was to wait until I was trying to stab something and then suddenly fold and bite into my index finger.  My constant state of injury did little to slow down the incessant search for things that needed my knife’s attention. I also would find subtle ways to remind every adult male in earshot that I had a knife and therefore was one of the pack now. “Hey, have I showed you my knife? what kind of knife do you like? I like the Spartan.”

I was busy pestering my grandfather, a cranky old union carpenter with battle scarred hands who smelled like Pall Malls, when it happened. He was repairing something in his garage when he needed to cut a length of hose. “Shoot” He said, as he realized that he didn’t have a knife. “Hey, can I borrow your knife?” He asked me. As cool as James Dean, I shrugged and pulled the knife out and handed it to him. He cut the hose and handed it back. I turned to walk out of the garage. “Where ya going?” He asked.