Independence Day With Dependents – Not Quite How I Imagined

Gearing up for all the Fourth of July theatrics up here. We’re all super excited to not be British and we’ll be celebrating that with fire and beer, the way God intended. At a lake, even.

I remember one of my first 4ths up in Everett, when I was all fat with the first child and forced to celebrate sober. It was a holiday full to the brim with romantic aspirations and expectations for all the holidays to come. Next year, I thought, I’ll be watching this parade with a babe-in-arms. I’ll be seeing these fireworks reflected in her big, blue eyes. It was gearing up to be a magical f’ing year.

In remembrance of that Fourth, and to all the days that followed (effectively killing the above dream), I give you this Independence Day Before and After.

The parade experience I expected – one of many rewarding moments in a parent’s life.

Parades ARE rad, right? Firemen, drum squads, flags, music, floats…those girls who stomp their feet and clap a lot…in unison. The Madness does not approve. The Madness hates parades and everything they represent – all that senseless joy and loud noises. Even giant stuffed animals hurling candy into the crowd cannot break through her fury at being subjected to these pointless human rituals.

The Madness reacts to every parade in pretty much the same way. But we keep trying.

And FIREWORKS! Are you kidding me? Fireworks are AWESOME. Hooray for the Chinese, on that one. Love me some flash in the sky. Almost makes sitting through a baseball game worth it. In California, the firework restrictions were pretty tight. Up here in Everett, they’re quite a bit looser. I once thought that was fantastic.

Imaginary Madz and I basking in the glow of pure awesome.

In reality, it doesn’t actually get dark up here until roughly ten PM. In July, at least. In January it’s dark at two. Also, fireworks have become the bane of my existence. Turns out, they are really f’ing LOUD. Easily loud enough to wake up a baby who FINALLY passed out just about twenty minutes before a bunch of childless a’holes remembered they hadn’t blown anything up in almost a whole ten minutes. 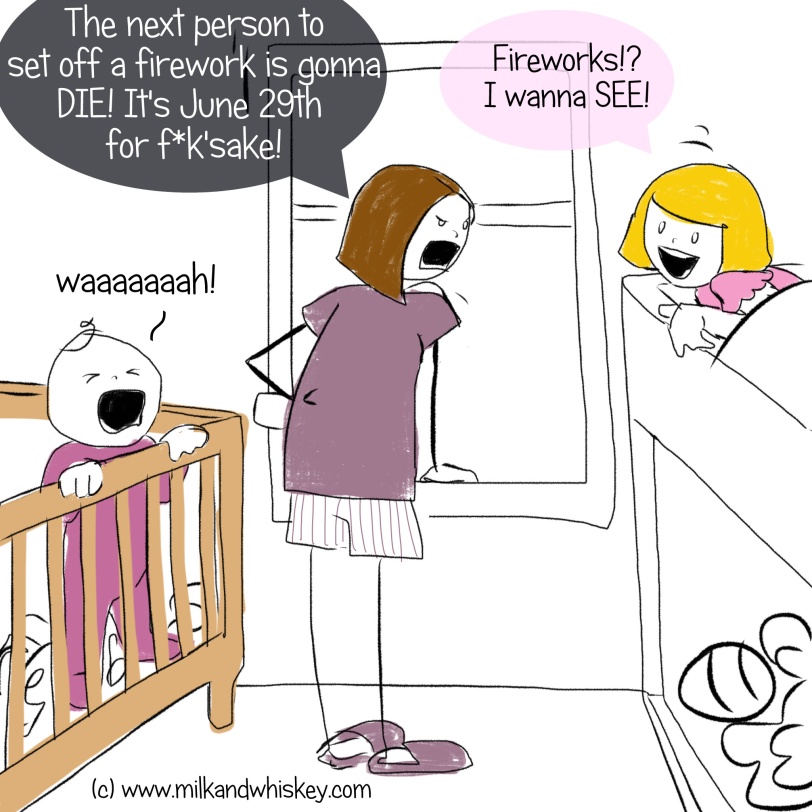 What I’m looking forward to for the next several days…possibly weeks.

Happy Fourth of July everyone.

(by which, I mean don’t drink and drive and don’t wake up the baby).