During the holidays our Grandma Ping tried to kill people. She didn’t mean to (we hope); she was a product of her time and didn’t fully grasp the risks. However, she was both extremely smart and diabolically cheap, so who knows. She also had very little sympathy for the discomfort of weaker folk, so there was probably an element of just not giving a rat’s ass.

You see, Grandma Ping didn’t believe in the necessity of refrigeration, which was obviously a passing fad and waste of electricity, or expiration dates (a plot to get you to waste money). Grapes had a permanent spot in the fridge but condiments, such as mayonnaise, lived in a cupboard. She also didn’t have a lot of turnover in her pantry stock after the last of her sons had moved out in the 70’s. That left her and gramps enjoying the infinite loop of the seven dishes she cooked as they read the paper front to back every day and played some golf. This turned her kitchen into a petri dish of doom for the unsuspecting when it came time to entertain, and she broke out the fancy cooking and annually used stuff. 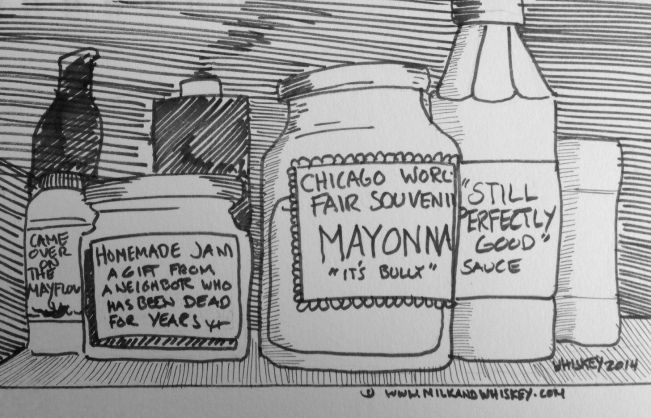 This went on for years with no one detecting the source of the problem. It was all very mysterious. Those of us who had grew up eating her cooking had developed a natural immunity to her unwitting attempts at poisoning us. It’s like the old saying, “you can’t poison a Peterson.” Unfortunately for our guests, they were not so blessed. Every so often, one of the family would bring a guest by for a holiday meal, like a new girlfriend or an old friend of the family who’d turned up around the holidays. Without fail, the guest would wind up doubled over and crying in the bathroom. The rest of us would scratch our heads and ask make jokes like, “is Steve playing a tuba in there? We’re very sensitive people after all. Steve would eventually exit the bathroom looking shaky, pale, and sweaty.  Then he would quietly slip off into the night after a hurried goodbye. Well, not that quietly.

“Hmm I hope he feels better, I saw something like that in the Pacific during the war… I think it was mosquito born, we lost a lot of good men to it” Gramps would venture then have a moment of quiet and shrug. “Another cocktail anyone?” (That’s the other family line of defense – a constant stream of bourbon to keep the microbes at bay.)

Finally one year, sure her mother-in-law was deliberately trying to kill her, our step-mom volunteered to help cook Thanksgiving dinner. Probably thinking she would catch Ping in the act of putting rat poison in her salad or something.

I visualize an Alfred Hitchcock reveal scene as she went from bottle to jar to bottle in the pantry each one more out of date than the last. Half of them opened at least six months earlier (If you were lucky) and put back to let the bacteria multiply. Mayonnaise, ketchup, mustard, relish, chutney etc. Somethings were so old they had a long since eclipsed packaging style to them. “Win a trip to the Grand Opening of Disneyland????” She gagged, after all she had eaten shrimp with that cocktail sauce an hour before. Then she had to go “play the tuba.”

So after that, and against Grandma’s protests about “overly delicate constitutions,” we purged her pantry. Even so, the following year, our step-mom brought fresh condiments just in case. They next year replacing her pantry became a new family holiday tradition.  After all, it would reflect badly on our already sketchy reputation in the neighborhood if a guest was hospitalized or actually died.  That and digging a shallow grave is way more work than it sounds.

Happy Thanksgiving from MILK and Whiskey.