How the Girl Scouts Scarred me for Life

My daughter, along with all the other little girls in Kindergarten, has been invited to join something called a Daisy troop. This is the kind of life-skill and relationship building activity that shouldn’t totally freak me out, but I’m slightly terrified of any group activity that involves more than two girls. You see, I was once a Brownie.

I can’t remember exactly how I got roped into joining the Brownies. Whiskey was in the Boy Scouts and had all sorts of outdoorsy adventures, but if I had thought I’d be starting fires with Swiss Army knives and tipping cows in the Girl Scouts, I was grossly misled. Brownies, at least the Palo Alto version, consisted of a series of play dates at our den mother’s house while she organized crafts and put on little plays designed to teach us manners and meekness and sewing. And cookie sales. Always with the cookie sales.

It was third grade we’d switched to yet another new school this one with a somewhat more monied demographic. There were a lot of stay at home moms,  and there was little these moms found more threatening than single, working mothers who were dismantling the fabric of America and probably trying to steal their husbands. Mom may have stuck me in Brownies to help me make friends at a new school, but as the progeny of a possible harlot, I wasn’t a super popular house guest. To make matters worse, I was an incompetent cookie salesman. I had the uniform, though, so they had to let me through the door. This was all terribly awkward in a way I didn’t fully comprehend, being eight years old and honestly too self involved to catch on that I was being shunned.

But let’s cut to the crazy, shall we? It was an afternoon troop meeting in the gym at school. All the little girls were sitting cross legged in a big circle in our charmingly hideous brown dresses, wondering what activity from the Brownie hand book we were going to do. Troop Mom, Mrs. Robbins, had her own pigtailed daughter run and fetch a big platter of chocolates that they had made together the evening before.

My eyes lit up. CHOCOLATE!? Maybe this meeting wouldn’t be made of suck after all! The platter began making its way around the room. There were two dozen small, milk chocolates, and just four or five larger, dark mounds like truffles. As the platter was passed, each little girl took a small chocolate. I was pretty stoked that, when the platter met me halfway around the circle, it still had all of the big chocolates on it. What kind of dumb kid takes a small chocolate, I thought, gleefully helping myself to a truffle and then holding it politely in my lap as I’d been instructed. The chubby girl took a truffle as well, but she was the only other one. This probably should have struck me as suspicious.

Mrs. Robbins said Grace and we all lifted our chocolates to our lips as one. I bit through the thin crust of dark chocolate and into a golf ball sized wad of hair. Fucking HAIR. Stringy, scratchy, dirty blonde and brown and gray hair from the family’s brushes, twisted up into balls and dipped in chocolate. I’m pretty sure, even in those days of lax school nutritional guidelines, human hair wasn’t considered an appropriate food stuff. In that moment of disgust and confusion, Mrs. Robbins went into a smug lecture on greed for the entire class. She quoted the bible. A lot. All the little girls with their milk chocolate discs, who’d obviously been warned ahead of time by their moms or Mrs. Robbin’s bitchy little clone, finished their treats with pleased little smiles. The chubby girl started to cry. As well she should, as we were obviously terrible human beings. Oh, the shame of it all. Now let’s all sing the Brownie song of friendship and do a craft with the empty milk cartons we’d saved from lunch. 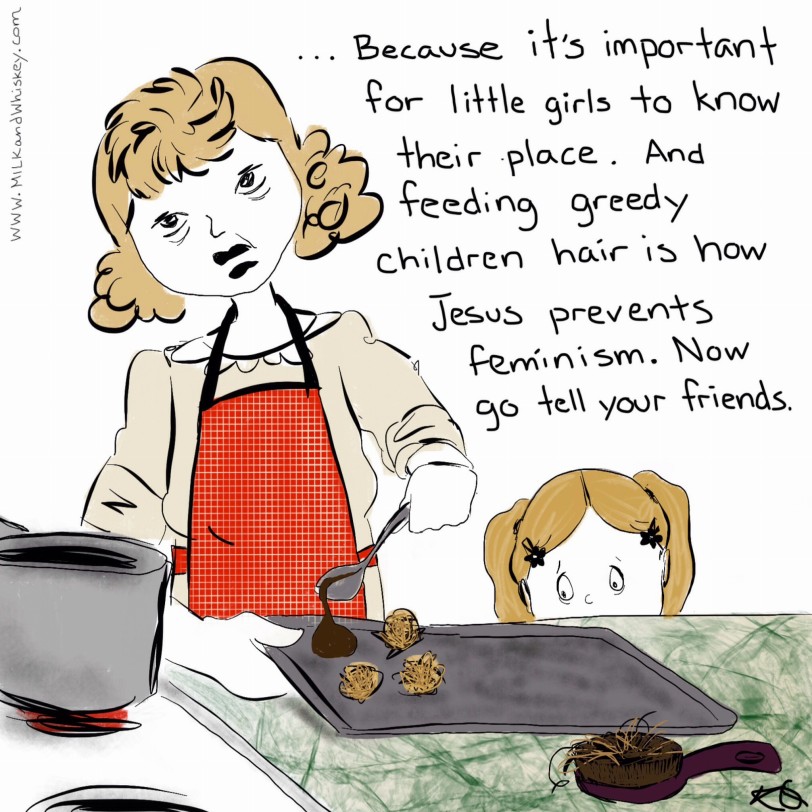 I’m not saying I throw the best play dates ever, but I can say with authority that I’ve never purposefully fed hair to anyone’s offspring. I mean, if I’m going to psychologically scar small children for life, I prefer instilling irrational fear to shame, but that’s just how I was raised.

I honestly wish I could go back in time, hold that woman down, and stuff her face with the remaining hair truffles. Instead, I quit Brownies and never looked back. Except in therapy. Which I also started that year. For anger management, or something.

17 thoughts on “How the Girl Scouts Scarred me for Life”